//The code must be inserted ahead of the call to the content Author Interview: Nizrana Farook on The Girl Who Stole an Elephant – Peachtree Publishing Company Inc.

Author Interview: Nizrana Farook on The Girl Who Stole an Elephant

Get a peek behind the curtain of the lush jungle world of The Girl Who Stole an Elephant with debut author Nizrana Farook! We asked Nizrana about the inspiration and writing process for her thrilling new middle grade read about friendship and adventure, and she’s sharing all about it here! 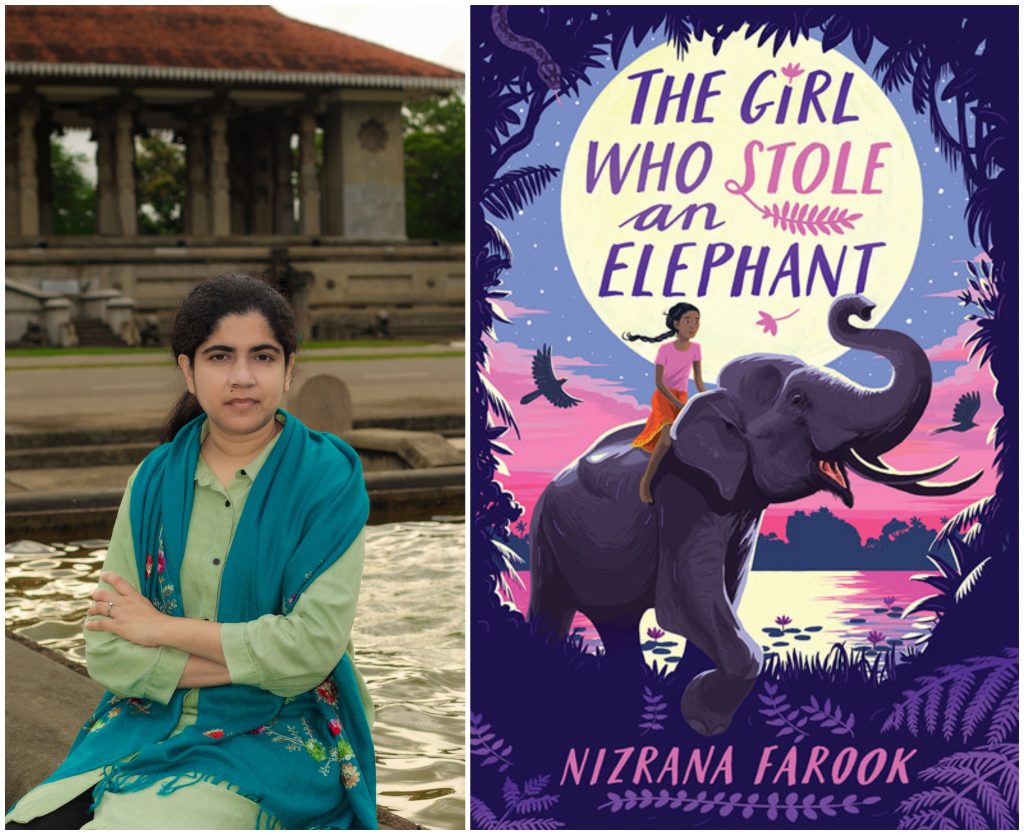 Q: What was your inspiration for The Girl Who Stole an Elephant?

A: I started writing The Girl Who Stole an Elephant one wintry December, and it was an escape to another world for me. As I wrote, I imagined a world of sunshine, warmth, action and color, and put all of that into the story.

Q: Is the setting of the story based on a real place?

A: Yes, it is. It’s a fictionalized version of Sri Lanka in the past. I’ve used some real places and some made-up and taken some liberties with the geography of things; but the setting is unmistakably Sri Lankan for anyone who knows the country.

Q: Chaya is a very bold, no-nonsense protagonist with a strong personality. How did you come up with Chaya as a character?

A: She came to me fully formed, so was my easiest character to create. I think she was aspirational to me in the sense that she would have been everything I wanted to be as a child. I would have found her really cool to have as a friend.

Q: If you were Chaya, and you had access to the royal palace, what would you steal?

A: Ironically for someone who created Chaya, nothing! She would have thought it a wasted opportunity, but I would just enjoy the sights and sounds without taking anything.

Q: Do any of Chaya’s qualities remind you of yourself when you were her age?

A: Perhaps her readiness to address injustice. I think as children we’re all generally full of incredulity and anger when we learn about injustice. As we grow older we sadly accept that the world is an unfair place and become desensitized to it.

A: I have to do a lot of thinking when I’m not writing. It’s part of my writing process that lots of the work happen inside my head when I’m cooking or walking or driving. When I haven’t had a chance to do that, I get stuck. So, I spend a few hours every day at the desk (generally school hours) and I’m immersed in and mulling over whatever I’m working on at regular intervals during the day as well.

Q: What do you like most about writing for middle grade readers?

A: I think it’s a fantastic age because children are ready for (and relish!) peril and knife-edge tension. I think it’s also a time when readers are made. I think if they’re interested in books at this age and are choosing their own, they will be readers for life.

Q: Which part of this story was your favorite to write? Was there a scene you loved that didn’t make it into the final version of the book?

A:  There were some scenes I loved, like the waterfall one, but I think my favorite to write was the very beginning. I can remember the excitement I felt when I thought, this is it, this might be the one!
In an earlier version Chaya and Nour spent more time in the jungle by themselves without Neel. Chaya falls ill and Nour learns to make a fire and makes Chaya a herbal concoction. It showed Chaya at her most vulnerable and Nour taking control of the situation. This part didn’t make it into the final book in the end.

Q: In The Girl Who Stole an Elephant, we’re limited to Chaya’s perspective. If you could tell the story from another person’s point of view, whose would it be? Why?

A: That’s an interesting question! Probably Nour because she was an outsider and might have given a fairly different account of things.

Q: What do you think happens next for Chaya and her friends?

A: I think Chaya gives up stealing forever. Nour joins Chaya’s school and starts lessons at the temple too. Neel comes back to school but keeps up his apprenticeship at the carpenter’s as well.

Q: What do you hope readers take away from Chaya’s story?

A: That there’s always room for others no matter how established you are in your friendships. That friendship and loyalty is everything, and it’s easier to be brave when you want to protect the people that are important to you.

Q: As an Own Voices debut author, why do you think it’s important for young readers to be exposed to diverse books written by people who share those identities?

A: I think young readers deserve to see themselves in books, and they deserve to have access to books about all people they share the world with. There’s a richness and authenticity in stories by people with lived experience of the places or topics they’re writing about.
I think it’s in everyone’s interest to get those books out there.

A: I am currently writing my third book, which is set in the same world as The Girl Who Stole an Elephant. It will have another animal as well!