Do you have a bird lover at home? Perhaps an aspiring birdwatcher, or maybe a youngster who’s a fan of all things nature? We’ve put together a list of bird-tastic fiction books just for you! Whether your kids are looking to join their own local Bird Count or follow a daring penguin on some wacky adventures, there’s a book on this list that’s sure to get your little ones and older readers excited about our feathered friends!

PEEP! A duckling hatches and immediately attaches itself to the first thing it sees—a warmhearted young boy. The duckling follows the boy home and soon the two are inseparable, but the duckling is growing up. One day when a flock of ducks flies by, the boy realizes that his friend will have to return to live among its own kind. Kevin Luthardt’s deceptively simple story poignantly and humorously demonstrates the importance of learning to let go of something you love. 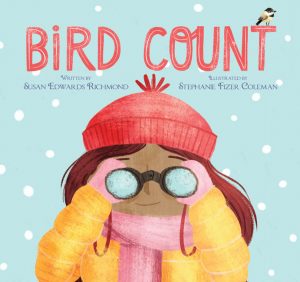 This year, young Ava gets to record the tally in the Christmas Bird Count. Using the birding techniques she’s learned, she eagerly identifies and counts the birds she observes around the town. At the end of the day, all the teams in the area meet up for a Christmas Bird Count party, where they combine their totals and share stories about their observations. This informative book offers simple explanations of the identification methods used by birdwatchers and clear descriptions of bird habitats to introduce young readers to birdwatching, and a section in the back provides more information about the birds featured in the book and the Christmas Bird Count. 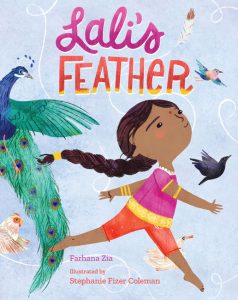 Lali finds a little feather in the field. Is it lost? Lali sets out to find feather a home, but one bird after another rejects it. The feather is too small for Rooster, too slow for Crow, and too plain for Peacock. But as soon as Lali decides to keep the little feather and discovers all the things she can do with it, the other birds begin to recognize its value. Farhana Zia’s charming tale of identification and values employs an inventive circular structure that reveals the importance of looking beyond first impressions and thinking imaginatively. Illustrator Stephanie Fizer Coleman brings this delightful story of imagination and inspiration to life.

The other hens can’t understand why extraordinary P. Zonka never lays eggs like they do―they think she’s just plain lazy. But when P. Zonka finally decides to give egg-laying a try, the other chickens are in for a spectacular surprise! Award-winning author and illustrator Julie Paschkis is sure to delight readers with this lovely story, inspired by the Ukrainian tradition of pysanky, about enriching the imagination and appreciating the beauty of the world.

Kalinka and Grakkle
by Julie Paschkis

Kalinka’s a showy little bird with an eye for neatness, but her grumpy neighbor Grakkle doesn’t care one bit about cleaning.  He just wants to relax in his favorite chair and soak his feet in a cool bucket of pickle juice.  “Grakk!” he complains as Kalinka “tidies up” his messes.  “You’re welcome,” she responds. They simply aren’t on the same wavelength.  Can an unfortunate accident plus a little humor and empathy help an odd couple like this see eye to eye? 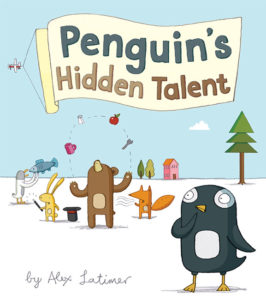 All of Penguin’s friends are excited about the upcoming talent show, but Penguin can’t seem to figure out what his talent is. Stuck behind the scenes organizing, Penguin leaves the contest saddened, the only one who hasn’t received a medal. When his friends decide to throw him a party, but their festivities fizzle, Penguin discovers he might have some special skills after all as he sets to work planning them all the best party ever. Alex Latimer’s quirky charm and distinctive illustrations light up the pages of this entertaining picture book about finding your true talent.

Mary McBlicken the prairie chicken is sure a stampede’s a comin’! She hurries to the ranch, gathering up her friends along the way. Before the fine feathered and furry folks get to their destination, they encounter a coyote who says he knows a shortcut. Should they trust him? Will they find Cowboy Stan and Red Dog Dan in time? And where is that rumbling coming from anyway? Jackie Mims Hopkins brings readers a hilarious, prairie-style rendition of a well-loved tale, and Henry Cole’s energetic illustrations perfectly complement the hilarity and will have readers laughing out loud. 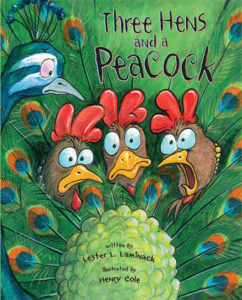 The Tuckers’ farm is a peaceful place. Everyone has a job and no one complains until a hapless peacock falls off the back of a passing truck and stirs things up. Soon, customers are flocking tothe farm to see what all the fuss is about. But the hens don’t like the newcomer getting attention while they do all the hard work. The wise old hound sees the problem and helps orchestrate a job swap. What follows is the hilarious tale of three hens who get in way over their feathered heads, and one very distressed peacock who just can’t figure out how to lay an egg. Lester L. Laminack has created a comical look at what happens when we underestimate the value of others’ work, and Henry Cole’s delightful illustrations will have readers of all ages laughing out loud.

Mr. Penguin has a dashing hat. He has a battered satchel. He has a packed lunch of fish finger sandwiches. Now he just needs an adventure! So when Boudicca Bones from the Museum of Extraordinary objects calls for help, Mr. Penguin swings into action. Can he and his sidekick Colin the spider find the museum’s missing treasure before bandits do? Or is this the adventure Mr. Penguin should have never answered? This humorous page-turning story from Alex T. Smith, the author-illustrator of the popular Claude series, is sure to thrill young readers looking for a good adventure. 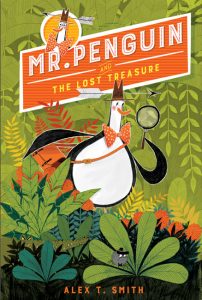 Meet Mr. Penguin: adventurer (and penguin)! He has a dashing hat. He has a battered satchel. He has a packed lunch of fish finger sandwiches. Now he just needs an adventure! Follow along as Mr. Penguin and his trusty spider sidekick Colin swing into action, whether they’re on the hunt for some treasure that’s gone missing from the Museum of Extraordinary Objects or searching for the source of strange noises coming from an old, ruined fortress. This humorous, page-turning series from Alex T. Smith, the author-illustrator of the popular Claude series, is sure to thrill young readers looking for a good adventure. 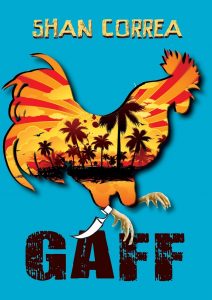 Paul Silva lives in a paradise―a little farm high in the hills of a lush, green island in Hawaii―where his disabled father makes a living by raising, training, and caring for roosters. But Paul has been sheltered from the harsh reality of the ties between the family business and the underworld of cockfighting. When a friend’s older brother decides to initiate Paul into this culture, Paul is shocked by what he sees. Illegal drugs. Gambling. But worst of all is the spectacle in the cockpit. With razor-sharp blades―gaffs―attached to their heels, the birds ruthlessly attack each other in a bloody fight to the death. Sickened by the brutal scene, Paul vows to find a way to get his family out of the business altogether. As he struggles to understand his family’s livelihood, he learns that being a man has nothing to do with wielding the power to hurt people and animals.

The town of Heartwood, Montana is burning out of control. Stoked by nearby wildfires, long-standing disputes over forestry policies have been reignited, pitting out-of-work local residents against environmentalists and state wildlife managers. At the center of the heated dispute is high school sophomore Luther Wright. Luther used to be just like all his friends, but now he spends his time helping the local veterinarian Kay rehabilitate injured raptors. Against the backdrop of Montana’s worst wildfire season in years, Luther begins questioning many of the community’s basic precepts, and in doing so faces alienation. But when someone starts shooting Kay’s birds and suspicious fires start breaking out, Luther is drawn into a situation far more dangerous than he could have ever imagined, and he must learn to navigate a difficult course between standing up for what he believes and maintaining loyalty to his family and friends.