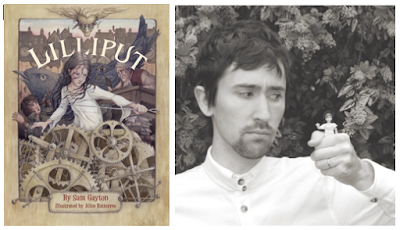 I have five copies of Gulliver’s Travels, the incredible fantasy tale that first got told back around the time when George Washington still had his baby teeth. Yesterday I bought my sixth. Here they all are on my desk, awaiting their newest member (they better not bully him when he arrives). 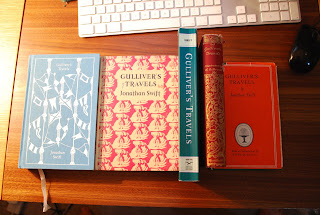 They’re all different. One of them is full of maps. Another was a bargain at £2. The third is full of tiny, Lilliputian-sized handwriting that I can barely read. The weirdest one has a picture of a little goblin dressed up as a snail at the end. I’m serious. We will never know why. 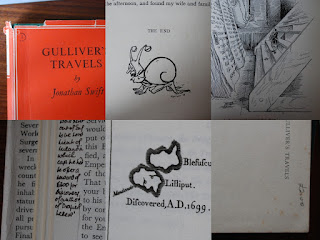 I didn’t buy a single one of them off the net. I liked to find them unexpectedly, you see. You’d be amazed at how many Gulliver’s there are, lurking down the back of charity shop bookcases, prices pencilled in the top corner of their title pages, sitting dusty and forgotten, waiting to be discovered.

It was sort of an obsession, for a while. Like baseball cards, or Pokémon. I just had to collect them. I didn’t know why.

I used to wonder, though. Was it because I wanted to give all these old classics a shelf to call home? Maybe I was just fascinated by the miniature. (I am, by the way – I have loads of small stuff, including a small guitar, a small book, two small people sitting on a small rock and a small creepy doll’s house up in the attic that could definitely feature in a Goosebumps book.) 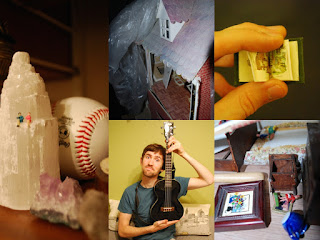 But then I realised. Maybe it was something else. Maybe I was collecting all these copies so I could see the different ways Gulliver’s Travels had been reprinted, reinterpreted, retold, and redrawn (sometimes with weird snail-goblins).

It took me a while to figure it out, but that was it. That was the reason! I was collecting all these re-tellings because somewhere, deep down the secret paths of my brain where stories wander, I wanted to have a go at reinterpreting Gulliver’s Travels myself.

So I sat down at my desk, and started writing.

I didn’t really know what story I was telling, or how it would be different from Gulliver’s Travels. I didn’t know where it was set, or who it would be about. I was like Gulliver at that point: I travelled to a lot of strange places and got lost in each one.

Some writers hate that wandering feeling of not knowing where a story is going, but I like it. It’s exciting. And I find that if I keep wandering over the page for long enough, I discover something important.

That’s how I found my main character: Lily. 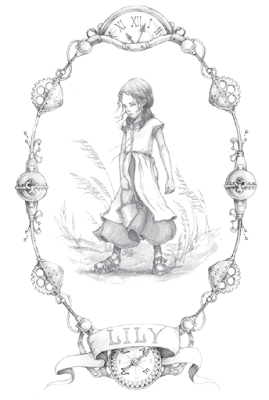 I’d been writing about Gulliver for a couple of months before she showed up.

Before that, I’d explored the idea of Gulliver deciding to journey to a whole bunch of strange new lands. But whatever I wrote, it didn’t seem to feel right. Gulliver didn’t seem like a very nice hero to me. He’s miserable and mean by the end of his travels, and he isn’t exactly Dad of the Year either. He leaves his family for decades, and by the time he comes back, he decides he hates them!

But who else could be my main character? I had no idea. 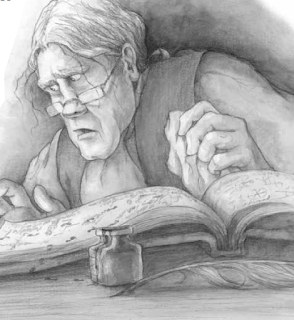 Then, one day, I found myself writing a chapter about Gulliver’s meeting with two thieves. Their names were Brindle and Petterkin.

This is roughly what I wrote: Brindle and Petterkin hide in a barn during a thunderstorm. They sell a stolen birdcage to a strange traveller called Gulliver, who pays them in tiny golden coins.

During the chapter, one of the thieves (Petterkin, I think) starts to wonder why Gulliver might need a birdcage. And then he notices that Gulliver’s pockets are sewn shut. And finally, at the end of the chapter, Petterkin swears he can hear the tiny, distant sound of someone crying.

Now, Brindle and Petterkin soon got cut out of my story. They weren’t very important characters. But they did help me discover something important – Gulliver wasn’t the hero of my tale, he was the villain! And he’d done something truly terrible. He’d kidnapped a Lilliputian child.

I remember finishing that chapter, and feeling very excited, even though I knew that nothing I had just written would go into my final book.

It didn’t matter. Suddenly, I knew what my twist on Gulliver’s Travels was about.

It was about a tiny girl, three inches tall.

Trying to get back. 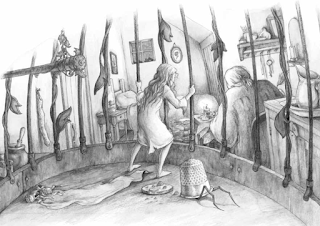 So that’s the story behind the story. That’s why I found myself buying up copies of Gulliver’s Travels, and how I first discovered my main character, Lily.

But if you’re still wondering why I’m so obsessed with tiny things in the first place, your guess is as good as mine. As Stephen Millhauser says: ‘Wherein lies the fascination of the miniature?’