//The code must be inserted ahead of the call to the content The Countdown Is On: Cover Reveal for the New Book by Suzanne Slade and Thomas Gonzalez – Peachtree Publishing Company Inc.

The Countdown Is On: Cover Reveal for the New Book by Suzanne Slade and Thomas Gonzalez 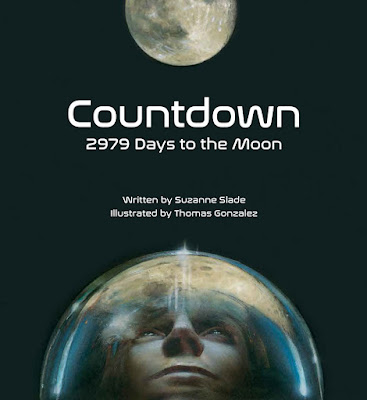 Tuesday afternoon, millions of people (including many of us here at Peachtree) were glued to their screens witnessing the launch of Elon Musk’s SpaceX Falcon Heavy rocket. The rocket launch reminded us of the excitement most of us have felt about our country’s history of space exploration and the enthusiasm that’s been building within our own walls for a gorgeous new book about the Apollo Moon mission.

In 1961 President John F. Kennedy announced that the United States would try to land a man on the Moon by the end of the decade. During the two thousand, nine hundred and seventy-nine days that followed his speech, eight rockets soared into space, and four hundred thousand people—engineers, technicians, scientists, mathematicians, and machinists—joined Project Apollo in hopes of making the dream a reality.

Today we are thrilled to share a special launch of our own and reveal the cover of Countdown: 2979 Days to the Moon. This book is the result of an epic collaboration between award-winning author Suzanne Slade (Dangerous Jane)—who is also a mechanical engineer who worked on Delta rockets, Titan rockets, and the Delta-Star spacecraft—and New York Times best-selling illustrator Thomas Gonzalez (14 Cows for America, Seven and a Half Tons of Steel). This stunning illustrated middle grade nonfiction book in verse teems with timely messages of STEAM, space exploration, trial and error, and collaboration. We can’t wait until you see the whole book.
Coming Fall 2018
THE COUNTDOWN IS ON
2018-05-31T13:50:03+00:00 February 8th, 2018|Announcements, Chapter Book, Children's books, News and Events, Peachtree Publishers|