Books on social justice themes have been rightly taking center stage in displays at bookstores, schools, and libraries around the country. Some could say this is a trend. But for us, it’s no trend; it’s an integral part of Peachtree’s mission.

We’ve been publishing books with social justice themes for years, as a result of our collective perspective, interest, and our headquarters in Atlanta, which is home to a long history of activism and civil rights icons. We’re proud of these works, and as we mark our 40th year of business, they’re needed more now then ever before. This is just a small snapshot. 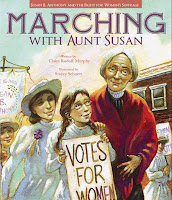 Inspired by the diary of the real Bessie Keith Pond, a ten-year-old girl who lived in California during the suffrage campaign, author Claire Rudolf Murphy and illustrator Stacey Schuett offer a thought-provoking introduction to the fight for women’s rights. A story of hope and determination, reminding readers that society cannot evolve unless people—even young people—dare to take a stand. 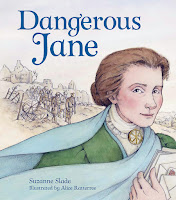 Coming this September, this energetic and inspiring picture book biography of activist Jane Addams focuses on the peace work that won her the Nobel Peace Prize. Suzanne Slade’s powerful text written in free verse illuminates the life of this inspiring figure while Alice Ratterree’s stunning illustrations bring Jane Addam’s and her world to life. 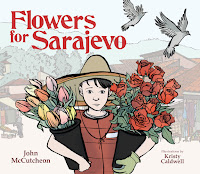 Young Drasko is happy working with his father in the Sarajevo market. Then war encroaches. Drasko must run the family flower stand alone. Based on real events of the Bosnian War, award-winning songwriter and storyteller John McCutcheon tells the uplifting story of the power of beauty in the face of violence and suffering. 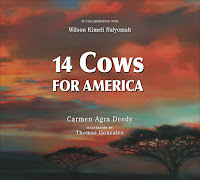 This New York Times best seller recounts the true story from Wilson Kimeli Naiyomah of a touching gift bestowed upon the United States by a tribe of Maasai Warriors in the wake of the September 11th attacks. With the stunning paintings by Thomas Gonzalez, master storyteller Carmen Agra Deedy hits all the right notes in this elegant story of generosity that crosses boundaries, nations, and cultures. 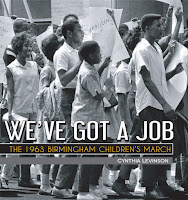 We’ve Got a Job

In the 1963 Birmingham Children’s March, the fight for civil rights lay in the hands of children like Audrey Hendricks, Wash Booker, James Stewart, and Arnetta Streeter. The children succeeded—where adults had failed—in desegregating one of the most racially violent cities in America. By combining in-depth, one-on-one interviews and extensive research, author Cynthia Levinson recreates the events of the Birmingham Children’s March from a new and very personal perspective. 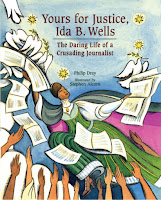 Yours for Justice, Ida B. Wells

In 1863 the Emancipation Proclamation freed Ida B. Wells from the bond of slavery. Blessed with a strong will, an eager mind, and a deep belief in America’s promise of “freedom and justice for all,” young Ida held her family together, defied society’s conventions, and used her position as a journalist to speak against injustice. Philip Dray tells the inspirational story of Ida B. Wells and her lifelong commitment to end injustice. Award-winning illustrator Stephen Alcorn’s remarkable illustrations recreate the tensions that threatened to upend a nation while paying tribute to a courageous American hero. 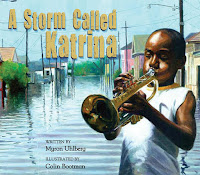 A moving story of the effects of Hurricane Katrina on the people of New Orleans, as seen through the eyes of a ten-year-old boy. Myron Uhlberg highlights resilience and hope throughout this sensitively portrayed fictional story based on the real events of Hurricane Katrina. Colin Bootman’s illustrations enhance the warmth and strength of the young narrator’s family as they work through such a great tragedy. 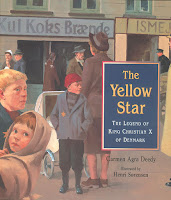 For centuries, the Star of David was a symbol of Jewish pride. But during World War II, Nazis used the star to segregate and terrorize the Jewish people. Except in Denmark. When Nazi soldiers occupied his country, King Christian X of Denmark committed himself to keeping all Danes safe from harm. New York Times best-selling author and storyteller Carmen Agra Deedy has poignantly recreated this legend, which is accompanied by Danish illustrator Henri Sørensen’s arresting full-color portraits. The result is a powerful and dignified story of heroic justice, a story for all people and all times.

To see all related titles, please visit our Edelweiss Catalog.

Check out more Peachtree reading round-ups:8 Books to Celebrate Women in HistoryReading Around the World: Books That Cross Borders