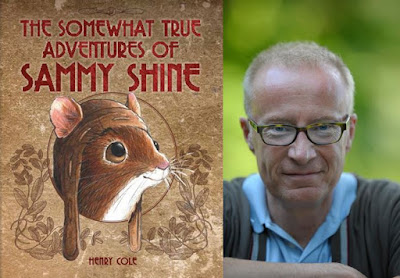 The Somewhat True Adventures of Sammy Shine—by New York Times-bestselling author-illustrator Henry Cole—features an adorable mouse on a big adventure. When Hank’s brother sends Sammy up in in a remote airplane and loses control, Sammy suddenly finds himself at the wheel of the mechanical bird. Just when he thinks he might be able to steer to safety, Sammy crashes into the Great Woods with no way home and a new enemy. Fortunately, Sammy forms a group of woodland friends, and together they embark on the quest of a lifetime: to find his broken plane and fly home to Hank.

To learn a little more about the story behind the story, the wonderful Henry Cole agreed to share how his new book was inspired by his own childhood memories and experiences of playing outdoors. 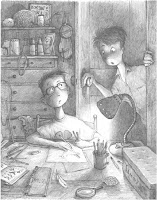 Tell us the story behind The Somewhat True Adventures of Sammy Shine. Why did you decide to call it “somewhat true?”

I called the book “SOMEWHAT” true adventures because the story is somewhat true. I based the characters of Jimmy and Hank on my brother (Jimmy) and myself. I had a pet mouse as a kid named Sammy, and Jimmy was always making and inventing things, so I put them into a story.


The Somewhat True Adventures of Sammy Shine takes place almost entirely in the woods. Are there any areas like the “Great Woods” near your childhood home, or where you live now?

We had “The Woods” at the north end of our farm—a deciduous woods with tulip poplar and hickory and oak and sassafras and dogwood trees. Also honeysuckle, pokeberries, goldenrod and mayapples, all which invited birds like blue grosbeaks, ruby throated hummingbirds, downy woodpeckers, red-tailed hawks and catbirds. Perfect! 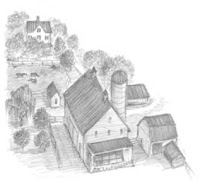 Have memories of growing up on a farm influenced your books?

I’d say so!! Growing up on a farm has probably influenced my books more than anything else. I think the intimate relationship I had with the wildlife like maidenhair ferns and spotted salamanders and blue-gray gnat catchers has influenced everything I do.

Did your personal experiences and childhood memories inspire your illustrations in the book?

Yes!  The picture of the workroom where Jimmy displays the Spirit of Sammy? That’s almost identical to the one we had growing up. My oldest brother Bill saw the drawing and knew immediately what it was! The picture of me at breakfast? Our kitchen. Of the bedroom with Sammy and Phoebe in the window? My bedroom. And all of the illustrations that depict flora and fauna… they all come from years growing up exploring the woods. 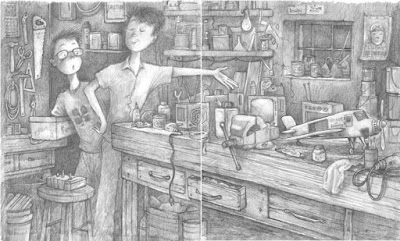 You once said in an interview that there are “so many schools [that] seem to be homogenized, sterile environments, and I wonder what kids are doing after school that is creative play.” Why do you think creative play is an important tool for learning? Was Sammy Shine inspired by creative play?

Sammy was DEFINITELY inspired by creative play. The only kind of play we did as kids was creative play. There were no video games—even board games were pretty dull and only to be considered during blizzards, etc.  I was lucky to grow up in a house where there were places to build, cut wood, solder metal, spill paint…and there was room outside to build forts and tree houses, design and build toy boats and submarines, explore, put up bird houses…I could go on and on!  But that’s where ideas and memories come from: creative play. 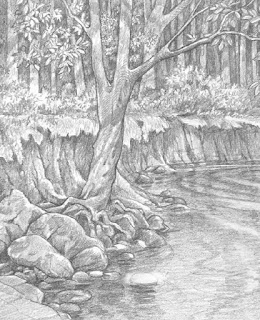 What were some of your favorite outdoor activities as a child?

Favorite activities: I loved building bird houses, and then watching to see who moved in, who raised families, and such.  I loved gardening: I had terrific vegetable gardens and grew amazing things. I also loved drawing: I drew all the time, mostly things that happened on the farm, but also fantasy animals and underwater cities.

Nature themes run through many of your books. Do any new insights from the natural world appear in Sammy Shine?

Sammy Shine has some very loose connections to The Wizard of Oz, possibly my all-time favorite movie. Sammy leaves, but wants to get home. But I took it one more step: he gets back home, and then realizes how wonderful the Woods was. I’m thinking that maybe people will see how great it is to get connected, or maybe re-connected, to the outside world, like Sammy did.

While I was writing Sammy Shine I kept thinking of places that I wanted to put pictures. So I guess the process of creating your own story is different from illustrating someone else’s story…because you’re constantly imagining the whole thing in your head as you write.

What do you hope readers will get out of reading Sammy Shine?

Sometimes I think stories should just be tiny little escapes—no homework, no troubled homes…and please no more Dystopia!!—where kids can go and let their imaginations go. Here’s a perfect story for that: fly away with a courageous little pet mouse, crash-land in a foreign world, and then try to get home.  My favorite quote from a letter I received from a kid: “You make my life feel like a new place.” What a great compliment! 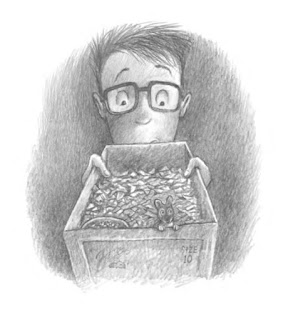 Follow Sammy Shine and his friends on their adventure when The Somewhat True Adventures of Sammy Shine lands on bookshelves April 1st!