//The code must be inserted ahead of the call to the content If You Had a Super Power… – Peachtree Publishing Company Inc.

If You Had a Super Power… 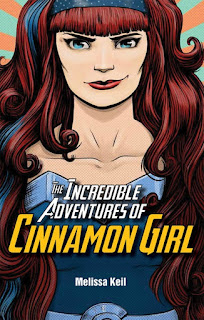 In just three weeks, The Incredible Adventures of Cinnamon Girl will be in your local bookstore, and every reader’s latent comic book superhero fantasies will be ignited!

Well, ours were, anyway.

For example: At the office the other day, we were chatting about superheroes and their powers, when someone asked a very important question—If you were a superhero and you could only have one power, what would it be?

In The Incredible Adventures of Cinnamon Girl, Alba, the protagonist, has a passion for comic books and superheroes. Her favorite is Wonder Woman, who has a wide array of super powers. But, when forced to pick only one super power, we found that our colleagues’ choices revealed a lot about them…

The vast majority of Peaches chose a power related to time—having more time, freezing time, turning back time, you name it. So as a general conclusion, we wish we had more time to work, nap, and generally get things done in our busy, book-filled lives.

On to specifics. If the Peaches were superheros with only one power they would pick:

Melanie, our Production Manager, chose invisibility. She liked the idea of being able to disappear and reappear wherever she wanted.

Emily, our Sales Marketing Assistant, chose teleportation. She loved the idea of being able to get pasta in Italy on a whim or avoid all the wonderful Atlanta traffic.

Kathy, our Vice President and Associate Publisher, couldn’t decide on a superpower, and explained that really she just wanted a time-turner like Hermione Granger.

Courtney, our School/Library Event Sales and Awards Coordinator, also chose teleportation, being able to travel to any distant place in the blink of an eye. 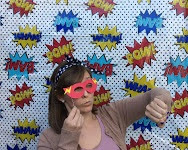 Niki, our Associate Publicist, wanted to be able to freeze time and start it again at her leisure. She liked the prospect of being able to stop time in the middle of the day to take a nap without missing anything important.

Melissa, our Conference Coordinator, chose telepathy, being able to know what other people are thinking.

Matt, our Systems and Data Manager, explained the power he would want using an example from Futurama. In the show, one of the character drinks way too much coffee, and his actions get so speedy that it looks like the rest of the world has slowed down. So, Matt wanted the ability to slow down time.

Elyse, our Marketing and Publicity Assistant, wanted the power to control time, whether it be speeding it up when she’s cooking, or slowing it down to get more done at work.

Farah, our Subsidiary Rights Director and Trade and International Sales Manager, wanted to be able to turn back time, go back and redo certain things.

Nicki, our Creative Director (and a native of England), immediately chose teleportation. With family in other countries, it was a no-brainer to choose the ability that would allow her to visit anywhere in the world in a moment.

Vicky, our Senior Editor, had perhaps the most unusual choice of everyone—omniscience. She explained it as the ability to go anywhere and know anything, speaking to anyone in any language.
Finally, Margaret, our President and Publisher, wanted the ability to read everything incredibly quickly and remember everything that she read.