An Interview with Cynthia Levinson

In continuing our 50th anniversary week of the 1963 Birmingham Children’s March and celebration of We’ve Got a Job, Cynthia shares a bit about her writing process and what it was like to write such an important book: 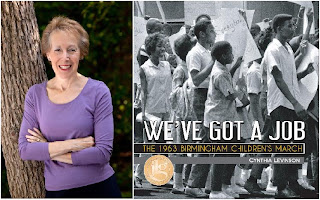 We’ve Got a Job is your first book — when you started this process did you envision it as the book it has become? What were some of your early goals for this project?

My first goal was to learn the story, myself. Although I was in high school in 1963, I didn’t know that the key actors in obtaining civil rights in Birmingham were children. So, I wanted to fill the gaps in my knowledge. Once I set out on the quest, I couldn’t stop! And, when I discovered James, Audrey, Wash, and Arnetta, who generously told me their stories in detail, I knew that children today needed to hear them, too.
I don’t think I could have envisioned the book that it became, partly because Maureen Withee did such a spectacularly creative job designing it. In addition, Kathy Landwehr’s editing pushed me to investigate, clarify, and verify critical story lines and details that I hadn’t initially understood or appreciated. This book was definitely a team effort. So, it ultimately became a common vision, not mine alone.
You did a lot of research and travel while developing We’ve Got a Job. What advice would you give other nonfiction writers looking to capture authenticity in their writing (something you’ve done so well)?

First, thank you! My basic advice is: Listen–closely and critically. I learned much more than I anticipated by asking a question with one area of inquiry in mind, only to discover layers I was unaware of by being open to hearing unexpected responses. So, listening entails being willing to question one’s assumptions. Of course, writers also have to ferret out whom to listen to. I talked to everyone who would let me; it took a degree of skeptical analysis to determine which people were reliable and revealing.

What do you hope people will take away from We’ve Got a Job as we look back over the last 50 years since the march?

Many children I talk with about Birmingham 50 years ago are disbelieving about the extent of segregation and cruelty there then. I think it’s important for young people to be aware that, although prejudice takes different forms today, it still exists. And, where they see it, they can act to erase it.

What are you working on now?

Thanks to Peachtree, I’m working on two new projects! The one I’m immersed in at the moment focuses on circus–children’s circus–as a way of overcoming boundaries. These boundaries can be physical, political, religious, cultural, and social. It should be a thrilling and revealing book.

Thank you Cynthia first for writing such a wonderful book and for taking the time to talk a bit about it!