A Dickens of a Birthday! – Peachtree Publishing Company Inc.

A Dickens of a Birthday!

What do you think of when you hear ‘Charles Dickens’?
A Tale of Two Cities?
Great Expectations?
Oliver Twist?
The fact that his pen name was “Boz”?
Or do you think about the theme park ‘Dickens World‘ in Chatham dedicated to the Boz himself, which is apparently a real thing? (You can get half-price admittance if you show up in full Victorian garb!)

At Peachtree, we tend to think of The Cheshire Cheese Cat: A Dickens of a Tale! 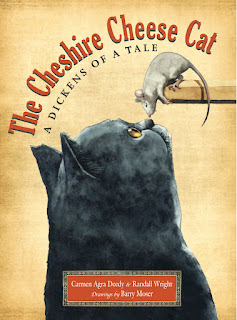 Skilley is an alley cat with an embarrassing secret: He hates eating mice, but he loves to eat cheese.

Longing to escape his street-cat life, he hopes to trade London’s damp alleyways for the warmth of Ye Olde Cheshire Cheese Inn. When he learns that the innkeeper is looking for a new mouser, Skilley comes up with an audacious scheme to install himself in the famous tavern.

Once established in the inn, Skilley strikes a bargain with Pip, an erudite mouse. They agree that Skilley will protect the mice who live at the inn, and, in turn, the mice will provide him with the thing he desires most—the inn’s delectable cheese.

But when Skilley and Pip are drawn into a crisis of monumental proportions involving a tyrannical cook, an unethical barmaid and a malevolent tomcat, their new friendship is pushed to its limits. The escalating conflict threatens not only the peace of the Cheshire Cheese Inn but also of the British Monarchy.

Unbeknownst to Skilley and Pip, however, they have a secret ally: a famous author who scribbles away many an afternoon at the Cheese. In this playful homage to Charles Dickens, unlikely allies learn the lessons of a great friendship.

For more on The Cheshire Cheese Cat, check out our blog tour from October and be sure to follow SLJ’s Battle of the Books — the Cheese is battling it out for the title in March!

No matter what springs to mind when pondering good ol’ Charlie “Boz” Dickens, most of us have at least a novice understanding of who Dickens was and his great contribution to literature. We still hail him as one of the greatest writers of ever, his books still top school reading lists (and personal reading lists!) and we continue to adapt his stories and introduce his words to new generations of readers, all these many years later.
Happy 200th Birthday, Charles!