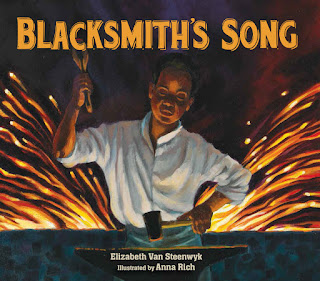 Pa works hard as a blacksmith. But he’s got another important job to do as well: using his anvil to pound out the traveling rhythm—a message to travelers on the Underground Railroad. His son wants to help, but Pa keeps putting him off. Then one day, Pa falls ill and the boy has to take over.

Inspired by tales of communication on the Underground Railroad, author Elizabeth Van Steenwyk presents a powerful story of rhythm and craft in nineteenth century America—with beautiful oil paintings by illustrator Anna Rich and back matter that includes more information about the Underground Railroad. Blacksmith’s Song offers a unique angle on the folklore of the secret communication channels between slaves as they traveled towards freedom.

“An intriguing new angle on an important story.” —Kirkus Reviews

“A plausible, powerful vision of ingenuity and daring in action.” —Publishers Weekly

“A shadowy color palette situates the narrative in the twilight and moonlit hours, perfectly complementing the suspense of the plot…. Ending on a hopeful note, the book brings this piece of hidden history to life.” —Booklist

“Inspired by tales of the Underground Railroad and its innovative methods of communication, a perilous story of courage and cunning unfolds…”
—Foreword Reviews

“The design of every spread lends itself well to an oral reading or presentation, which would serve as a stimulus for more in-depth information or discussion on the topics of slavery and the Civil War….a welcome addition to an introduction of the Underground Railroad.”
—School Library Connection

Blacksmiths are craftsmen who create objects from iron or steel and produce items like tools, weapons, furniture, railings, and gates. Blacksmithing has been around since humans have been using metals to create. And if you have ever watched a blacksmith at work, or heard the sound of hammer hitting anvil in a repeated pattern, you will notice the musicality of the sound as well as the art behind the craft. Some of the tools are very heavy, and it requires a lot of skill and muscle to shape hot metal.

Although Blacksmith’s Song is a historical fiction story, many slaves did work as blacksmiths. One such example is James W. C. Pennington, who was enslaved on a Maryland plantation, but eventually escaped and made his way north alone. Living as a free man, he became the first African American to take classes at Yale University, became a minister, and dedicated his life to the abolition of slavery. Pennington wrote and published The Origin and History of the Colored People, which is considered the first history of African Americans in the United States. His memoir The Fugitive Blacksmith was published in 1849. (You can read it in its entirety here, or the summary here.) 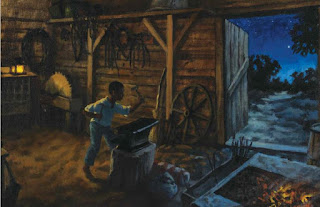