New Book Wednesday: Seven and Half Tons of Steel

Powerful text from Janet Nolan is paired with stunning illustrations from New York Timesbest-selling illustrator Thomas Gonzalez (14 Cows for America) in this inspiring story about how something remarkable can emerge from a devastating event.

Following the events of September 11, 2001, a beam from the World Trade Center Towers was given to the United States Navy. The beam was driven from New York to a foundry in Louisiana, where the seven and a half tons of steel, which had once been a beam in the World Trade Center, became the bow of the USS New York.

Seven and a Half Tons of Steel presents fascinating insight into the shipbuilding process, as well as introduces a story from history that will be new to most young readers. Back matter provides additional facts and information on the Navy and its ship, with even more materials and tools available in the teacher’s guide. 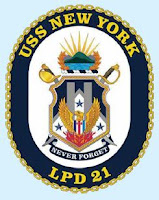 While Janet Nolan provides the true story about the transformation of the beam into the ship’s bow in this picture book, the story of the USS New York continues in the real world as it sails around the world transporting U.S. Marines to dozens of countries and bases. If you are interested in learning more about what this historic and symbolic ship has been doing since its creation, check out these resources:

– This New York Times article describes the beginning of last leg of the new warship’s journey from the foundry in Louisiana back to New York City. Learn a little bit about the crew that manned the ship for the very first time.

– Read in this article about the ceremony and excitement that accompanied the USS New York‘s arrival in New York City. Hear from crew members about their experience of that homecoming.

– The official website for the USS New York is also a great resource to see more pictures of the real ship and find out what the ship is doing around the world.

– The USS New York was just one piece of the many projects that grew out of a desire to rebuild from the ashes of the events of 9/11. Read about the last 15 years of reconstruction that has been happening in New York City and throughout the country in the New York Times 9/11 Reconstruction archives.

Seven and a Half Tons of Steel comes out August 1! Look for it at your local library, indie bookstore, or Barnes & Noble. Interested in what other books we are publishing this season? Check out our list of new books here!