//The code must be inserted ahead of the call to the content Sunday Brunch with Myron Uhlberg and Ted Papoulas – Peachtree Publishing Company Inc. 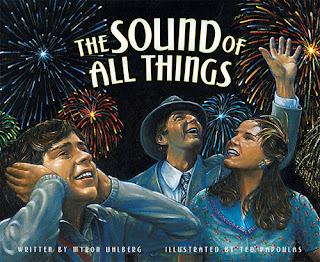 Written by Myron Uhlberg and illustrated by Ted Papoulas, The Sound of All Things follows a family of two deaf parents and their hearing son as they experience a noisy summer day in 1930’s Brooklyn and Coney Island. Since this story documents the silent world of the deaf, we were eager to learn more about its inspiration and creation. Both author and illustrator shared some insight with us and explored the challenges and joys of creating The Sound of All Things.
Myron, can you give some background of this book’s connection to your own personal experience?

Myron: My mother and father were deaf.  Born hearing, I was their first child.  My first language was sign language, a language not of speech but of signs made with the hands, supplemented by the grammar of the face and body.  From the earliest age, I felt no space existed between me and my mother and father.  But at an early age my father asked me to be his ears and voice in the world of sound: my world, but a world as foreign to him as the moon was to me.  With this request I stopped being a child, and overnight was forced to confront my parents’ world—a world of absolute silence.

This period of my life—being my father’s ears and voice—opened the door to the world of the deaf, the world of eternal silence. That experience made me the young man I was to become, and the man I am today.  One day, long after they had died, I felt compelled to write about my parents’ world, a world unseen (deafness is not visible) where communication and understanding takes many different forms.

Ted, do you think it is possible to illustrate sounds?
Ted: Since you can’t literally illustrate sound, the artist has to figure out a way to spur the viewer into creating the desired sounds in his or her mind. If done correctly, sounds can be invoked just as emotions, and even tactile sensations, are passed to viewers solely through images.
How did you tackle showing sounds in your illustrations?
Ted: Many of the illustrations for The Sound of All Things depict busy street or amusement park scenes. By paying attention to the details and choosing poses, actions and elements that combine to create a full, authentic and active environment, the artist can create a vibrant image which prompts the user to add the missing sounds. A lifetime of experience forms sensory expectations that can be tapped into.
Myron, what are some of the hardest sounds to describe in words?
Myron: Any sound that is not readily analogous to a visible or tactile object presents great difficulty in transliterating into Signs.  Also, consider that not every English word has a comparable Sign.  Even though there is a deaf alphabet—and therefore every English word can be spelled out—little meaning may attach if there is no reference point.  Thus how to describe the sound of Beethoven’s Fifth Symphony, which my deaf father could feel in his fingertips, but not hear with his ears?
How did you choose which sounds the son in the book had to describe to his father?
Myron: The art of a picture book text is compression.  Therefore, every scene and every word of The Sound Of All Things hopefully is used to convey the three elements of the story: the love of a child for his parents as well as their love for him, the unique world of both sound and silence and the language that binds them together, truly a language of love.
Ted, what was the easiest or most difficult scene to illustrate in The Sound of All Things? Do you have a favorite?
Ted: That’s a hard question…each illustration presents its own challenges and absorbs my full attention while I’m working. Once it’s completed, the next one assumes that attention, so each exists in its own bubble. But, some do naturally present more challenges and I can become more attached to one piece over another based on the subject matter and composition or perhaps some area of the painting that surprised me or was executed especially successfully. 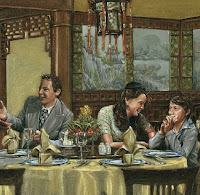 Being a big fan of Brooklyn, where I lived for most of my life, the opening two pieces—the scene overlooking the Brooklyn Bridge in the morning and the painting of the family catching the trolley with Ebbets Field in the background—were enjoyable to create. They were also the first two images completed, which brought the project from a purely conceptual state into tangible reality and that’s always an exciting moment. I also really enjoyed painting the crowded Boardwalk scene. Who cannot be happy while thinking about Coney Island?

I was a little concerned with the Chinese restaurant interior before tackling that piece but it turned out to be a nice change of pace from the exteriors and one of my favorite paintings. My hope is that readers of the book will have their own preferences and each painting will be somebody’s favorite image.

In a conversation about the need for diversity in children’s books, The Sound of All Things presents a form of diversity often overlooked because of the invisibility of sound.  Myron, what do you hope readers will get out of reading your book?

Myron: I wrote The Sound of All Thingsto bring to the attention of hearing children (and their parents and educators) the world of the Deaf—a world of silence, in plain sight, but invisible, among the larger world of ceaseless sound.

In doing so, I hoped to generate both thought and discussion about the means of communication used in both worlds—aural speech for the hearing, Sign Language for the Deaf—and the power that one’s language has in the development of one’s perception and accommodation to the world one lives in.

The Sound Of All Things, as well as some of my previous books, attempts to shine a light on the Deaf world—from the fact of its very existence, to the challenges it presents to its inhabitants, and on to its common language. Communication for the Deaf is a most human language of the hands, the face and the body—a language of signs, gestures, and expressions as visually beautiful and expressive as a spoken Shakespearean play.

Ultimately, my story is a celebration of the beautiful ways in which all of humanity coexists in this shared beautiful world we all live in, bound by the cords of familial love and the common language used to express that love.