We know how difficult it is to find the right present for everyone on your holiday list—from your little princess-of-a-niece who already has everything, to your old college friend’s newborn baby. This year, we’re challenging you to nix the good ol’ reliable sock gift. Let us help you with our Holiday Gift Guide! A book is like a new gift with every read, and there’s one out there for every reader at any age.

P. Zonka Lays an Egg: While extraordinary hen P. Zonka spends her time taking in the beauty around her, the other hens can’t understand why she never lays eggs like they do and think she’s just plain lazy. But when P. Zonka finally decides to give egg-laying a try, the other chickens are in for a spectacular surprise! The perfect celebration of artistic dreaminess! (Ages 4-8)

For Those with Royal Aspirations:
Princess and Packet Frozen Peas: Prince Henrik wants to marry an outdoorsy kind of girl, so he tests prospective brides with an entire packet of frozen peas shoved under a flimsy camping mattress. As princess after princess complains, Henrik begins to believe he’ll never find the girl of his dreams, until one day she shows up unexpectedly in the form of his old friend, Pippa. (Ages 4-8)

King of Little Things: In a long ago world of vast kingdoms lives a king who happily reigns over all things small. He has all he needs and doesn’t want for more. But King Normous wants to be Ruler of All the World. He gathers his armies and soon he has erased every empire and raided every realm—almost.  Only the King of Little Things stands between King Normous and his goal of conquering the world. But little things can wield great power. (Ages 4-8)

For the Nature Lover:
About Series: Cathryn and John Sill have created a beautiful and extensive series on both animals, and the habitats they live in. Using simple, easy-to-understand language, and striking paintings, this series brings its readers up close to the creatures and worlds presented by offering accurate and interesting content that will appeal to anyone who loves nature. (Ages 3-7)

Planting the Wild Garden: As a farmer and her son carefully plant seeds in their garden, many seeds are planted in the wild garden, as well. Different kinds of animals, weather, and sometimes extraordinary occurrences transport all sorts of seeds, showing that many elements—some unexpected—work together through the seasons to create and sustain the wild meadow garden. (Ages 4-8)

For the Picky Eater:

The MonsterWho Ate My Peas: What do you dread eating the most? For the hero of this story, it’s peas. A young boy thinks he’s discovered a way to avoid eating his peas—he makes a bargain with a fiendishly funny monster. First the deal is simple: the monster will eat the boy’s peas in exchange for his soccer ball. But with each new encounter, the monster’s demands escalate. Eventually, our hero faces a daunting decision—can he conquer his loathing for peas or will he lose his most prized possession? (Ages 4-8)

For the Cat Lover:

Where is Catkin?: A cat’s curiosity lands him in a tight spot. As Catkin climbs over the wall to hunt, he tries to look for the creatures he can hear, until he gets stuck! Beautiful illustrations and an entertaining seek-and-find element will make cat lovers want to read it over and over! (Ages 2-6)

My G-r-r-r-reat Uncle Tiger: When Marmaduke the tabby cat discovers a picture of a tiger, he decides they must be related—after all, they both have yellow eyes and stripes! Join Marmaduke as he leads his other feline friends on a daring adventure to the zoo to meet his new relative—face to face… (Ages 2-6)

For the Dog Lover:
Bark Park: Welcome to Bark Park, where dogs of every shape, size, and personality romp and roam. With a rollicking, rhyming text and colorful, simply detailed illustrations, this book offers a delightful, affectionate look at our canine companions and why we love them. (Ages 2-6)

Stay! A Top Dog Story: Looking after Ben’s dog, Buster, is no walk in the park. Buster is messy, he is naughty, he is EXHAUSTING! But Ben loves him more than anything. When Ben goes away, he tells Grampa exactly how to look after Buster. But has Ben remembered the most important thing? Dog lovers will get a kick out of Buster and his loving owner! (Ages 4-8)

Claude Series: Claude is no ordinary dog—he leads an extraordinary life! Follow Claude and Sir Bobblysock on their adventures packed with humor and fun, from vacation at the beach to a haunted theater to perform with a dance troupe! These illustrated chapter books make great gifts for little adventurers just starting to read on their own. (The Claude series includes: Claude in the City; Claude at the Circus; Claude on the Slopes; Claude at the Beach; and Claude in the Spotlight. Ages 7-9)
For the Budding Wildlife Conservationist:

A Place for Series: This series introduces readers to some pressing environmental issues facing the world today. Providing basic information about certain species, as well as pointers on how youngsters can help protect these animals in their own neighborhoods, any of these titles, like the newly revised A Place for Birds and A Place for Butterflies, will inspire anyone to do their part in protecting the wildlife around them. (Ages 6-10)

Night of the Spadefoot Toads: When his family moves to Massachusetts, Ben finds a kindred spirit in his eccentric science teacher.Together they explore the varied habitats on her rural property, and Mrs. Tibbets introduces him to the elusive and endangered Eastern spadefoot toads that make their home there. When Ben discovers that Mrs. Tibbets’s relatives plan to sell the land to developers, he knows he must try to stop them. Winner of the Green Earth Book Award, this novel by Bill Harley reminds readers that conservation can begin in their own backyard. (Ages 8-12)
For the History Buff:
Dog Chronicles Series: Learn about history through the eyes of a dog in Alison Harts Dog Chronicles series. In the most recent title, Finder, Coal Mine Dog, Finder joins his owner Thomas working in the coal mines; but when disaster strikes, can Thomas and Finder escape the fires from deep below ground? With three books in the series, each one focusing on a different historical moment, you can discover the roles of dogs during World War 1, the Gold Rush, and coal mining in the early 1900s. (The Dog Chronicles series includes: Darling, Mercy Dog of World War II; Murphy, Gold Rush Dog; and Finder, Coal Mine Dog. Ages 7-10)

For the Sports Enthusiast:

Fred Bowen Sports Story Series: Baseball, Soccer, Football, you name it! Fred Bowen has a wide ranging list of sports-fiction, perfect for anyone who wants to sink their teeth into an action-packed story centered on sports. Titles like Perfect Game, Double Reverse, and his most recent Out of Bounds, would make great titles for reluctant readers and sports fans alike. (Ages 7-12)

For the Horse Lover:

Chris Platt Books: Horse-crazy readers will love these books by Chris Platt!  With realistic details about training, competing, caring for these beautiful animals, any of these titles will easily satisfy horse enthusiasts looking for a good book, even if it isn’t quite the same as getting a real horse for the holidays. (Chris Platt’s books include: Astra; Storm Chaser; Star Gazer; Moon Shadow; Willow King; and Wind Dancer. Ages 8-12)

For the Classic Lit Lover:
Lilliput: Inspired by Gulliver’s Travels, Lilliput is an exhilarating adventure about a girl three inches tall who, for half her life, has been trapped in a birdcage while her giant kidnapper Gulliver sits beside her, writing in a leather-bound book the size of a house. Join Lily as she travels through eighteenth-century London – over rooftops, down chimneys, and into chocolate shops – on a journey to find the one place in the world where she belongs…home. (Ages 8-12)

The Cheshire Cheese Cat: In this playful homage to Charles Dickens, unlikely allies learn the lessons of a great friendship. Skilley, an alley cat with an embarrassing secret, longs to escape his street-cat life. Tired of dodging fishwives’ brooms and carriage wheels, he hopes to trade London’s damp alleyways for the warmth of ye olde Cheshire Cheese Inn. He strikes a bargain with Pip, an erudite mouse: Skilley will protect the mice who live at the inn, and in turn, the mice will provide Skilley with the thing he desires most. But when Skilley and Pip are drawn into a crisis of monumental proportions involving a tyrannical cook, an unethical barmaid, and a malevolent tomcat, their new friendship is pushed to its limits. The escalating crisis threatens the peace not only of the Cheshire Cheese Inn but also the British Monarchy! (Ages 8 and up)
For the YA Lit Lover:

Life in Outer Space: Sam is a geek, and he’s totally fine with that. He has his horror movies, his nerdy friends, World of Warcraft – and until Princess Leia turns up in his bedroom, he won’t worry about girls. Then Camilla arrives on the scene: beautiful, friendly, and completely irrelevant to Sam’s plan. He is determined to ignore her, except that Camilla has a plan of her own – and he seems to be a part of it! Sam believes that everything he needs to know he can learn from the movies, but perhaps he’s been watching the wrong ones. Humorous and heartfelt, Melissa Keil’s novel is a great read! (Ages 12-16)

J. J. Johnson Books: With three books, all with starred reviews, J.J. Johnson is able to present important issues during adolescence—like body image, friendship, and bullying, and growing up—in a way that all readers can relate to and understand. With great writing and memorable stories, you can’t go wrong with titles like Believarexic, The Theory of Everything, and This Girl is Different. (Ages 12-16)

Still need to look some more? Check out our most recent catalog to see all of our current titles! There are several convenient ways to order Peachtree’s titles. You can look at your local indie bookstore, find our books at Barnes & Noble or on Amazon, or order them directly through our website. 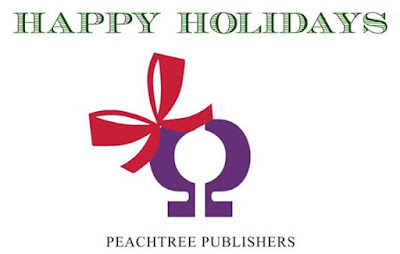