It’s day 4 of our blog tour and we’ve got a special guest post for you guys!
Welcome to the blog, Bill Harley! 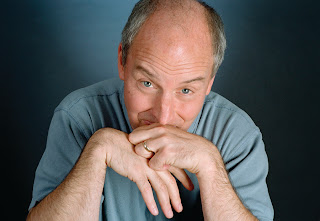 I’ve learned over the years that everything takes more time than it should. The idea for the Charlie Bumpers series came along eight or nine  years ago, when an editor suggested to me that I would be a good person to write a series about an elementary school boy.  Over the next year, I wrote the first draft of what would become “Charlie Bumpers vs. the Teacher of the Year”. Now, finally, we have a book.

Because of my work as a performing storyteller, I have a particular perspective on a fourth grade boy’s life. Many of my spoken word stories focus on my childhood – especially the years from second to sixth grade. Most of them are about me getting into trouble of some sort, usually inadvertently. And while I’m not interested in being heavily didactic or moralistic, I am concerned with what a story says about the world – kindness is often my underlying message. Beyond that, I’m happy to explore mayhem. My audience responds well to mayhem.

With my experience telling stories of growing up, telling Charlie’s story in book form was a natural step. I’ve spent a lot of time in elementary schools over the past thirty years  (I’m guessing I’ve been in 2500 schools), and while I’ve never been a classroom teacher, and would have a hard time hewing to any curriculum, I know the culture of schools, and I know the terror that lurks in the heart of a nine year old boy.

I mention terror with some hyperbole, but I really do believe that uncertainty about the future is a large part of children’s lives– they don’t really know what’s going to happen, and there ability to affect their situation can be pretty constricted. This terror is hard to stomach up close, but a half step away, it leads to humor and irony. Charlie’s first-person narrator voice is crucial to the story, and I knew what he should sound like right away.

Charlie is not faced with any life or death choices in this book, although his family will face some hardship up ahead in another book in the series. There are no deaths, no parents separating, no abandonment, no physical violence. Instead, I focus on the small challenges a kid can face in his or her day-to-day existence. I wanted to show that little things matter.

In thinking of what would come as a series, I decided the finished product (scheduled for six books) would take Charlie through the fourth grade year. Naturally, it begins with the start of school. In thinking about the start of the school year, it was easy to draw on my own memories of apprehension and excitement, as well as those of my own sons growing up. With Charlie in his next to last year in the K-5 school he attends, one would hope that he feels comfortable where he is.

And he would, but things go wrong.

He gets the one teacher he doesn’t want, his best friend isn’t in his class, and his nemesis, the unspeakable Samantha Grunsky, sits right behind him in class. Plus, he hates his new shoes.

Getting the “right” teacher is of great concern to all children – even if they don’t know who the “right” one is. Everyone has an opinion about teachers, and children talk among themselves about which teacher is the “best” or “nicest” or “strictest” or “funniest”. My feeling is that these everyday aspects of a kid’s life – who his teacher is, who’s in his class, who he sits next to – are small tests.  In negotiating these surprises and disappointments, character is developed. From the perspective of adulthood, some of these aspects don’t seem very important, but it’s my job as a writer to affirm for my reader that they are, and that there concerns are valid. Whether it’s a song I sing, or a story I tell, or a book I write, my main object is to affirm and honor the emotional life of my audience. Someone has to do it and I’m glad it’s me.