Ramadan and The Garden of My Imaan – Peachtree Publishing Company Inc.

Ramadan and The Garden of My Imaan

The holy month of Ramadan marks the ninth month in the Islamic calendar during which Muslims around the world fast between sunrise and sunset, focusing their energies on purifying their souls for Allah through sacrifice. 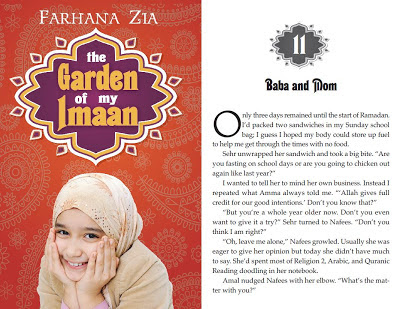 The Garden of My Imaan, page 69
written by Farhana Zia

With Ramadan beginning, we invited author of The Garden of My Imaan, Farhana Zia to share both about her book and the traditions of Ramadan. 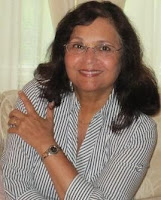 Q: First, for those who aren’t familiar, could you tell our readers what Ramadan is about and its significance?

Ramadaan  is the ninth month of the Islamic lunar calendar.  It is believed that the Koran, the holy scripture of Muslims, was revealed to Prophet Muhammed during this month.  Fasting during the month of Ramadan is one of the five pillars (religious practices) of Islam.  The month lasts 29–30 days based on the visual sightings of the crescent moon.  Fasting during Ramadan is obligatory for adult Muslims, except those who are ill, unable to fast due to medical reasons, traveling, pregnant, or menstruating.

During the course of the fast that lasts from dawn to sunset, Muslims abstain from consuming food and drinking liquids.  Smoking and engaging in sexual relations are also prohibited. They prepare for the fast by eating a meal before sunrise and they break the daily fast at sunset. Eid ul Fitr is the celebration at the end of Ramadan when families and friends gather together to celebrate their personal success. Children look forward to getting presents.

Muslims will tell you that Ramadan is more than just about giving us food and water temporarily. It is more about self purification, personal introspection and self growth. Ramadan is a time when one can seriously work to repair one’s relationship with one’s creator. This is mostly why Muslims actually look forward to the month go Ramadan!

Q: How did the storyline of The Garden of My Imaan evolve during the writing process? Did you always plan on writing about Ramadan/setting the story during Ramadan?

My journey with The Garden of my Imaan was pretty circuitous.  I originally intended merely to pay homage to what I thought was a very creative take on Eid celebration (the celebration that comes at the end of Ramadan) I had happened to observe, by writing a story about an Eid garden—a Muslim version of Christmas tree,  if you will.  Needless to say, things changed.  My original idea of a picture book grew into the present chapter book with an expanding story line that started to take on larger issues.   Still, at the root of an altered story, was the persistent idea of Eid ul Fitr, an important celebration for Muslims. But if one is to write about Eid, one needs to write about the reasons for Eid and thus, the focus on Ramadan.  Ramadan is an important month for observant Muslims and while technically it is about abstaining from food between the hours of sunrise and sunset, it’s actually about worship and spiritual cleansing and rejuvenation.  In its truest sense, the greatest challenge in Ramadan is not giving up food and water but improving oneself as a human being.  And so, the story of Ramadan became the perfect vehicle to show Aliya’s personal journey toward self-growth.

I thought it would be interesting to juxtapose Ramadan and Thanksgiving to show both sides of Aliya— her Muslim side, as well as her American side.  But this was a little tricky since Ramadan which is based on the 12 month lunar calendar does not always fall in the November.  But a feature of the Islamic lunar calendar is that the months (approximately 29 – 29.5 days) drift each solar year by 11 to 12 days and every so often the calendar comes back to the position it had in relation to a solar year.   Another important point I wanted to get across was that while Ramadan is about abstaining from food and Thanksgiving, is about food, both observances expect a turning to the divine with humility and gratitude.

Q: Did your own childhood/familyexperiences influence your writing?

I think that one’s experiences, whether direct or vicarious, are generally at the root of one’s writing.  I personally feel that the best writing arises out of some form of emotional connection with the subject.  My picture book, Hot Hot Roti for Dada-ji is an example of how both personal as well as observed cultural experiences worked collectively to shape a story line.  When I wrote it, I was thinking primarily of things immediately and familiarly Indian and so food, inter-generational family arrangements and storytelling jumped out naturally. Memories of my grandmother telling stories, the remembered smell of the incense stick, the sights and sounds of roti making, multi-generation relatives interacting on a daily basis…those were the experiences that came into play into the writing of that book.

The earliest version of The Garden of my Imaan drew more heavily from family experiences than the present version does.  Still, certain anecdotes that appear in the story, such as the one about Aliya unwittingly breaking her fast, came out of personal experience and even as I say that, I’m sure that many young Muslim readers will claim it as their own experience and perhaps get a chuckle out of it.   The Thoroughly-Mixed-up Turkey chapter is another place where familiar experiences played a part. But what’s most meaningful to me in the book is the sense of family as illustrated by the Aliya-Amma-Badi Amma relationship.  There is no way one can put a price on it.  One can only hope that others are fortunate enough to experience it and reap its rich benefits.
Q: What do you hope readers will take away from Aliya’s story?

It would be great to hear that readers enjoyed the book and talked about it and discussed it.  As far as what I hope they will take away from the story, several things come to mind.  First of all, there is a subtle message at the heart of Aliya’s story and this is what it is:  what lies at our core determines who we are. Marwa has an identifiable core that makes her stronger, more intact as a person and ultimately a little more sure of herself. We can all hope to work on our inner core (our value system) so we are able to walk with surety, and with our head held high. It might be ambitious on my part, but still, this is what I hope readers will take away with them.

There is another message that I hope will be useful. It’s especially pertinent in a society that’s increasingly multicultural. We try to impart this message to our youngsters but we need to state it over and over again: Search out the similarity in others but also respect them for their difference.

Aliya’s story could be the story of any girl her age treading some choppy waters and navigating some bumps along the way.  Readers will recognize themselves in her as perhaps they too have tried at times to fit in or be included.  Perhaps they too have had a run in with a bully.  I hope then that they will see Aliya’s struggles as their struggle and be on her side and cheer her on as she works to resolve her issues and find her bearing.

When we first meet Aliya she is tentative but with time she grows more self assured.  I tried to speak to the inner strength that we all possess in varying degrees.  I hope the story will be uplifting as it is about faith in the human potential to do the right thing and walk the path that’s right for them.

Aliya receives a lot of help along the way. She has a supporting family and good friends.   I hope that young readers will see that if they are enmeshed in problems, there are people around them who can be counted on for help. One of the finest things one can have is a good sense of self.  I hope the readers will take that away from the book, if nothing else, and seek out opportunities that will nurture their own self identity.

Finally, I attempted to dispel certain misconceptions about Muslims and Islam in the book and I hope readers will see that Muslims come in all skin tones, enthicities and degrees of religious fervor and that they are no different in this from Christians, Jews, or Hindus. They are people with similar aspirations and ambitions as their neighbors. Most of all, I hope the readers will see that it’s not what’s on our head that matters but what’s in it.

Thank you for the opportunity to share some thoughts and Ramadan Mubarak to all Muslim readers!

Farhana Zia is an elementary school teacher who grew up in Hyderbad, India. Her stories blend humor and tradition, memories and contemporary moments. Her first picture book, Hot, Hot Roti for Dada-ji received a starred review from Kirkus.