My favorite Father’s Day activity to do with my dad is to go to the Braves’ game. It has been a tradition since I was very little (of course, some years, we have to resort to watching the game on TV when the Braves are out of town). 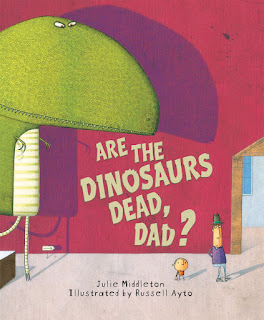 Are the Dinosaurs Dead, Dad?
Written by Julie Middleton
Illustrated by Russell Ayto
Dad takes Dave to the museum. As they walk through the dinosaur exhibit, Dave tries to get his father’s attention. Why is this one grinning and why is that one interested in Dave’s lunch? But Dad is too busy telling Dave all there is to know about these amazing creatures to notice that they’ve sprung to life! Dave gets the feeling that Dad has one hugely important fact very, very wrong…
Dad, Jackie, and Me
Written by Myron Uhlberg
Illustrated by Colin Bootman

It is the summer of 1947 and Jackie Robinson has just become the new first baseman for the Brooklyn Dodgers–and the first black player in major league baseball. A young boy shares his love of the game with his deaf father by listening to the games on the radio and then using sign language to tell his father about the games. Finally, his father has a big surprise for him: they are going to Ebbets Field to watch Jackie play! 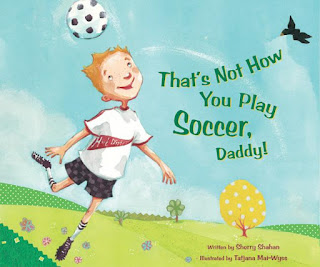 That’s Not How You Play Soccer, Daddy!
Written by Sherry Shahan
Illustrated by Tatjana Mai-Wyss
After a tough practice, Mikey’s dad and dog Socks take him to lunch at the park, but super-competitive Mikey only wants to practice for the big game. Daddy offers to help, but to Mikey’s dismay Daddy doesn’t put in much of an athletic effort. He keeps bending the rules and telling his impatient son to “just have fun.” After an irresistible ticklefest, however, Mikey finally comes around to Daddy’s way of thinking–and joins him and Socks in the worst, best soccer game ever! 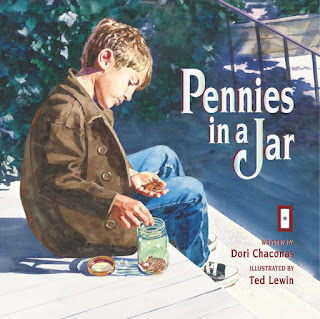 Pennies in a Jar
Written by Dori Chaconas
Illustrated by Ted Lewin
A young boy promises to be brave when his father goes off to fight in World War II. But it isn’t always easy, especially now that he and his mother are alone and the air is punctuated by sirens. Then one day a stranger with a small pony named Freedom offers the boy an opportunity to create the perfect birthday present for his father. But that means digging down deep inside to find a new and special kind of courage… 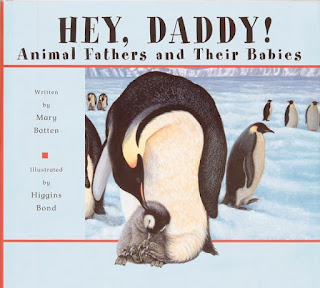 Hey, Daddy! Animal Fathers and Their Babies
Written by Mary Batten
Illustrated by Higgins Bond
In the vast animal kingdom, mommies are often solely responsible for the birth and upbringing of their young. But daddies can, and do, help in a variety of surprising ways. Among the featured fathers are the blue jay, the marmoset and the beaver, who share parenting responsibilities with the mother, as well as several animal daddies (such as the seahorse, the penguin, and Darwin’s frog) that perform more extraordinary roles. Finally, the human father is singled out for devoting the most time of all to raising his young until they can survive on their own.
What is your favorite memory with your dad?
Happy Reading!