Dr. Ferrol Sams, one of our earliest and most esteemed authors, passed away this morning at the age of 90. 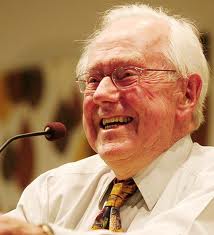 Sams, widely known as Sambo, was born in Fayetteville in 1922, in the house built by his great-grandfather in 1848. He graduated from Mercer University and the Emory University School of Medicine. World War II temporarily interrupted his medical studies; he was stationed in France as a member of the Army Medical Corps.

Sams had a family medical practice in Fayetteville, where he has worked with his wife, Helen, also a physician, and two of their sons. Somehow this busy country doctor also found time for one of his favorite hobbies—writing. Between the hours of 4:00 and 6:00 a.m., he wrote a novel on a Blue Horse tablet with a blue, felt-tipped pen.

At the age of 60, Sams published his first book with us, Run With the Horsemen, which chronicles a boy’s account of growing up on an ancestral farm in Georgia. Run With the Horsemen continues to be a classic Southern novel reminiscent of To Kill a Mockingbird, Tom Sawyer, and The Catcher in the Rye. This past summer, the Georgia Writers Association honored Sams with a Lifetime Achievement Award at the 48th annual Georgia Author of the Year Awards.

He is survived by his wife, daughter, three sons, eight grandchildren, and six great-grandchildren.