We’ve Got a Job: The 1963 Birmingham Children’s March

There’s a lot of information on Peachtree’s main page and on author Cynthia Levinson’s website (as well as through the many links at the bottom of this post), but we thought we’d give you a first-hand glimpse at Cynthia’s process of researching and writing this incredible book.

Welcome to the blog, Cynthia! 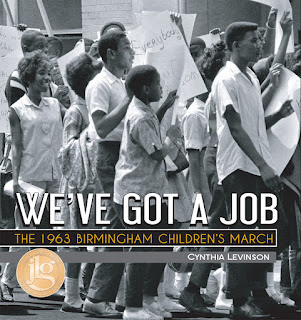 My 3-day Blind Date with my Editor

“A writer’s relationship with an editor is a sacred one.”
True words spoken by Kadir Nelson at the Texas Book Festival, 2011

My debut book, WE’VE GOT A JOB: THE 1963 BIRMINGHAM CHILDREN’S MARCH, was fortunate enough to attract interest from three publishers. Naively, I assumed I’d choose the highest bidder. Wisely, my agent suggested I talk to the acquiring editor at each house to get a sense of how we’d relate to each other during the revision process. Oh, I suddenly realized, editing JOB won’t be just a mechanical process of deleting commas and making verbs and subjects agree. We’d communicate about the substance of the book, share ideas, maybe disagree, negotiate. Yeah, I’d need to get along with that person.

Ultimately, I chose not only by bid but also by person. The others were very hard to turn down but when Kathy at Peachtree Publishers told me she’d been looking for a writer to tell the story I was proposing, I knew she was as committed to it as I was. But, could we commit to each other? I would learn soon, as Kathy’s bid included a trip to Atlanta, where Peachtree lives, and then a two-day research trip to Birmingham—together.

I was honored by Kathy’s support for the book. But, I also felt like the boy in the Dr. Seuss story who meets up with the green pants in the woods. Was she as scared of meeting me as I was of her?

You don’t have to break the ice with your editor the way we did. But, getting to know each other over a bottle of wine on my son-in-law’s parents’ back porch sure helped. We hugged at the door. We learned that Kathy’s husband collects cartoons. Their five-year-old son adores zombies. This sounds like a real person!

At Peachtree the next day, I met everyone, including the publisher, the receptionist, the artists, the publicists and marketers, the woman who packs the boxes of books shipped from the warehouse, and both cats. And, the doughnuts were yummy. Kathy and I also started on our substantive work.

One of the four people who marched in Birmingham when he was a teenager now lives in Atlanta. Although I had talked with James by phone many times, we had never met. He agreed to come to Peachtree and to bring artifacts of his involvement in the civil rights movement. 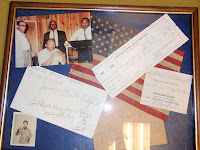 “I love that you still have the flag,” Kathy told James. I looked closer at the framed memorabilia he brought. Yes, there was a small American flag. James explained that he was given that flag at a mass meeting the evening he learned that the courts declared that marchers, who had defied city laws and been jailed and then expelled from school, would be allowed to return to school. What a lovely and important story her comment elicited! (And, you might notice Dr. King in the center of the photograph–with James’s uncle.)

That afternoon, the two of us went to the Martin Luther King Jr. National Historic Site for a moving program on the life of the man who inspired and led the events I was writing about. Then, we drove the three hours to Birmingham. Even though I was, again, nervous about how we’d pass the time, talking about Dr. King, other civil rights leaders, the other three marchers, the story we wanted to tell, even recollections of growing up all solidified our relationship.

Over the next two days, Kathy and I spent A LOT of time together. Dinner at a French bistro I had found on my two previous research trips to Birmingham. Breakfast at the hotel the next morning. A tour of the Sixteenth Street Baptist Church, which was the headquarters of the movement in May of ’63. An extensive walk along the Birmingham Civil Rights Trail, where I found a placard with a quotation from one of the other marchers, with whom we had dinner that night, along with his wife. An interview with another marcher. More interviews the next day, a tour of the Birmingham Civil Rights Institute, and conversations with the archivist.

After assuring each interviewee that her or his story would be respected,Kathy’s comments, questions, and observations were insightful and elicited revealing responses.

■ She asked Arnetta, who is light-skinned if she had ever thought about “passing” as a white. “No,” Arnetta answered. “You are proud of what you are. You are made by God.”

■ She asked the sister of a deceased marcher about their parents. And we learned that they had realized only recently that their parents had courageously sued the city to be able to use the public parks.

In the end, Kathy pointed out “how exhausting” it must have been for Birmingham to sustain its severe degree of segregation.

At the end of that long day: another three-hour drive back to Atlanta where I expected to thank her effusively and collapse at a friend’s house.

Except, my friends suddenly had to leave town. So, I spent the night in the guest room at Kathy’s house where I got to see her husband’s cartoon collection and their son’s zombie collection.

By that time, either we’d wonder how on earth we’d be able to spend the next 15 months working together or we couldn’t wait. You can figure out which.

Newbery-Prize-winner Rebecca Stead said in her talk at the Texas Book Festival that a relationship with an editor entails “trusting and coping.” Because I knew I could trust Kathy, I was able to cope when she pushed me on several issues, such as the potential demise of Dr. King’s leadership of the civil rights movement. Her questions led me to investigate further, to retrench a bit, and to verify. Because I hope that she learned she could trust me, I also pushed back in at least one instance–the inclusion of Wash’s Sunday school experiences in a chapter on mass meetings. We both trusted; we both coped.

Our field trip to Atlanta and Birmingham and back again was intense, revealing, and reassuring. I had made not only the right decision but also a friend, a colleague, and a mentor.

For more information on Cynthia and We’ve Got a Job: The 1963 Birmingham Children’s March, check out these links:

Emu’s Debuts features We’ve Got a Job for a whole week!

An interview with Cynthia at Boys and Literacy blog!

Pintrest page, including links to all things We’ve Got a Job!