Once Upon a Time… – Peachtree Publishing Company Inc.

Once Upon a Time… 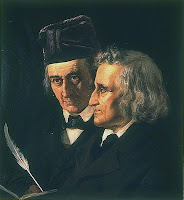 …there were two brothers, Jacob and Wilhelm Grimm. They were born in the mid 1780’s in Hanau. Little did they know that they would become two of the most influential storytellers of their time. The brothers wrote a German dictionary, studied linguistics–creating Grimm’s Law–but most importantly, published a collection of folk and fairy tales that we still reference today.

There are many elements common to most folk tales, like Cinderella, the Three Little Pigs, and Rumpelstiltskin. 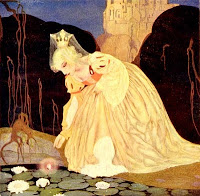 Before the Disney movie The Princess and the Frog, the Brothers Grimm wrote The Frog Prince. The basic story, as many of us learned it as children, is that a beautiful princess is playing by a well with her favorite toy, a golden ball. The ball slips from her fingers and falls to the bottom of the deep well, making her cry, and getting the attention of a talking frog. The frog offers to retrieve the ball, but for a price. She must take him home with her and love him, let him eat from her plate, and sleep in her bed. After initially being repulsed by him, she eventually agrees to give him a kiss, which breaks the spell that had been cast on him by an evil witch, turns him into a prince and they live happily ever after.

What many don’t realize, is that in the original version, there was no kissing. The princess broke the spell by throwing the frog against a wall, and in other versions, she must cut off his head in order to turn him back into a prince. In folklore, shapeshifting spells were often broken by acts of violence. In fact, Grimm’s tales are exactly that… grim. Most parents don’t want to tell their children that the ugly step sister cut off her toes to fit into the glass slipper, or that the handsome prince falls out of the tower into thorn bushes and is blinded by the witch in Rapunzel. This is how variations came about. Certain elements are altered to accommodate and make a story suitable for a certain age or culture, but the core story remains the same. In 1971, Jim Henson did a Muppet version of The Frog Prince that introduced us to Robin, the frog, and the monster, Sweetums, which to this day is my favorite version.

Disney brought the story to New Orleans and the bayou, while our very own, Jackie Mims Hopkins gave us The Horned Toad Prince set in Texas. 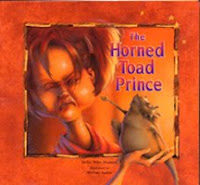 ‘Would you give me a kiss, por favor?’ asked the horned toad.
‘You’ve gotta be kiddin’!’ shrieked Reba Jo. ‘You know dang well a kiss wasn’t part of this deal, you low-life reptile.’
‘If you do this one last thing for me, we’ll call it even, and I’ll be on my way pronto,’ the horned toad said.
‘You’ll leave right away?’ Reba Jo asked suspiciously. ‘You promise?’
‘Si, te lo prometo,’ agreed the horned toad.
Reba Jo thought hard for a minute. She glared at the horned toad. ‘I can’t believe I’m even considerin’ this,’ she said, ‘but if it means you’ll leave right now… pucker up, Lizard Lips.'” You can see, even from this short excerpt, how the dialog, slang, and use of Spanish words help to set a very specific tone for a Texan adventure… a far cry from the Grimm brother’s native Germany. The princess in this story becomes a cowgirl who loses her brand new hat after it is blown off of her head in the arroyo. Lucky for her, she comes across a horned toad who will retrieve her hat for a bowl of chili, a song, and a siesta in her hat.

All of these changes update the story and make it more accessible to young kids. Do you have a favorite folk or fairy tale? Have you looked up other versions and adaptations? How would you change The Frog Prince to make it relate more to your kids or students?

Other Folktales from Peachtree: