Classic stories like “Little Red Riding Hood” and “Rapunzel” usually evoke a girl who finds herself in some sort of trouble and ends up getting rescued by a strong, capable man who conveniently appears just in time. But for author-illustrator Bethan Woollvin, there can be so much more to these stories than the typical fairy tale trope of a “damsel in distress.” With the success of her debut picture book Little Red and the buzz surrounding her upcoming book Rapunzel, Bethan agreed to provide some insight into her inspiration and decision for creating the self-empowered protagonists who challenge the traditional gender stereotypes found in fairy tales. 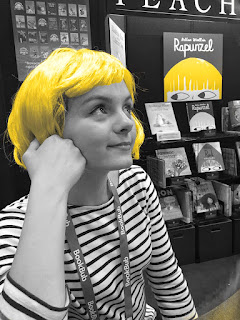 When I wrote Little Red and Rapunzel, I didn’t necessarily write them with a feminist agenda in mind. It all happened a lot more naturally than that. I simply wanted to create stories and characters that I would have enjoyed to read about when I was a child, instead of the damsels in distress we so often read about in classic tales.

As a feminist, my views and opinions will instinctively feed into my work—because it’s just a part of me—but there was never a conscious agenda in my stories. So to see something so close to my heart receive such a warm reception makes me so happy. It’s brilliant to see “girl power” connect with so many people. This being said, the amount of readers voicing their surprise or excitement to my books highlights just how much of a problem gender inequality remains.

The topic of gender and what it means has always interested me. I even went as far as writing my dissertation on gender equality in food advertisement. While researching for this project, I stumbled across an article which quoted Melvin Burgess saying: 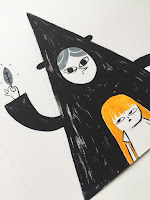 Similar to other industries such as clothing and toys, children’s books are still often targeted at gender-specific audiences, which I believe is incredibly outdated.

I wrote Little Red and Rapunzel, not just to satisfy me, but for my younger, head-strong sisters. I want them to have access to books with brave and daring female characters to look up to, without the well-worn narrative of being saved by a handsome prince or a burly wood-cutter. I created my female protagonists to be resourceful, smart, and brave, who are undeniably capable of saving themselves. In turn, I chose to leave out the male saviors from my re-tellings because they simply felt unnecessary.

As I developed my stories, I realized that adding in extra characters only diluted my protagonists’ power. I wanted them to dictate their own stores, and including other entities only hampered this. With this in mind, I leave out a lot of the peripheral characters from my stories that are present in the classic tales. 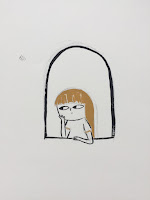 Since the publication of Little Red, I have often been asked whether I intended to illustrate my characters to look quite androgynous. Indeed I did, mainly to challenge the problem Melvin Burgess highlighted. I design my characters so that all young readers, regardless of how they identify their gender, will be able to relate to them and invest in the story.

Little Red is (arguably) human, but nothing about her shape or facial features looks typically female. The only way we really know that she is a female is by her pronoun usage throughout the book. Rapunzel, on the other hand, looks typically more feminine than Little Red does as Rapunzel’s a more human shape and clearly wears a frilly dress. 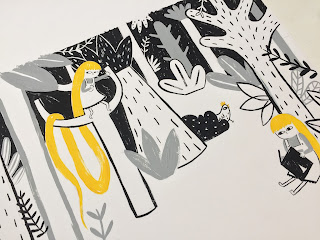 Both Little Red and Rapunzel have the fact that they are heroines in common, but both are expressing their gender identity in different ways.

I believe it’s really important for me as a children’s book illustrator to be responsible for representing different kinds of characters throughout my books. I give each character their own personality and their own clothes. I don’t focus on making any of my female characters “pretty” or visually ‘beautiful’ unless it’s part of the narrative. This is because my characters aren’t there to show children what females should look like; they are there to tell a story.

I’d like to think that the publishing world can become more forward-thinking in the future and will create more children’s books with strong female protagonists and inclusive characters.

Look for Little Red and Rapunzel at your local library, indie bookstore, or Barnes & Noble.