Critical thinking and information literacy are vital skills for children in today’s society. Educators have always been seeking to help students look at information critically, and discerning fact from fiction has now become especially important. For young readers, look no further than Prince Ribbit by Jonathan Emmett and Poly Bernatene to begin that conversation. 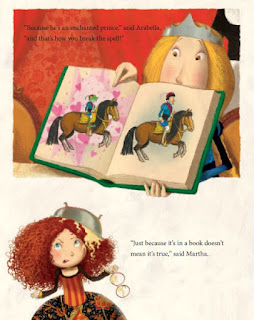 Most people may be familiar with the classic fairy tale “The Frog Prince” by the Grimm brothers, where a young princess makes a deal with a frog that helps her, and she in turn agrees to invite him into her castle and share her food, drink, and bed with him. In the story, he ultimately turns into a handsome prince, and they agree to marry and move to his kingdom. (Learn more about the magical tale here.)
But in Jonathan Emmett and Poly Bernetene’s clever, thought-provoking spin, when three princesses meet a conniving talking frog who suggests that if they pamper him to his heart’s content, he will turn into a handsome prince (just like in their story books), nonfiction-loving Princess Martha suspects otherwise. Armed with frog-filled facts from her science volumes,  she sets out to expose Prince Ribbit and prove that he is just an ordinary amphibian fooling her two sisters. But “just because it’s in a book doesn’t mean it’s true.” 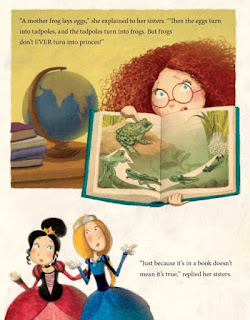 Children can enjoy this book for pure entertainment’s sake, but Prince Ribbit can also be a fun exercise in metacognitive reading skills. The phrase “just because it’s in a book doesn’t mean it’s true” is used by multiple characters throughout the story to support their own beliefs—Princess Martha uses it to persuade her sisters to look past their fairy tale stories.  Her sisters in turn use that phrase against Princess Martha and her science books. And when a surprise twist repeats the phrase on the very last page, the reader must think about whether that phrase applies to everything he/she just read.

The reader has been seeing (or hearing) the words “just because it’s in a book doesn’t mean it’s true” for 30 pages, but have they actually learned that lesson? This ending forces—even if it’s only for a brief moment—readers to think critically about everything they’ve just read.

They must consider character: Based on what they know of Martha’s character, is she the type of person to marry for looks after he becomes a prince (despite hating the man’s personality when he was a frog)? 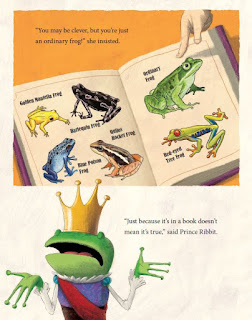 They must consider tone: Based on what they’ve read so far, does this feel like a smooth and realistic ending to the story?

They must consider textual evidence: Didn’t the narrator tell us repeatedly that the frog is cunning and sly, that he’d “come up with a plan” to make his dream of being wealthy and well-fed come true? And didn’t the frog devise this plan immediately after hearing the story of The Frog Prince?

The reader is either rewarded for their critical reading at the conclusion of the story OR is reminded in “gotcha!” fashion of the book’s lesson: be critical; you can’t trust everything you read.

A Fuse 8 Production’s Betsy Bird said it best: “With a steady hand and a working brain, a parent, teacher, or librarian could easily spin this book into a lesson that would ultimately do child readers a world of good. Read carefully. Read critically. Read everything and then form your own opinion from the facts, as best as you can gather them. Or, if you just prefer, read this cute book because it has princesses and talking frogs in it. As far as I can tell, that’s a win-win situation.”

You can find Prince Ribbit at your local library, indie bookstore, or Barnes & Noble.