For Sunday brunch this week, President and Publisher Margaret Quinlin talks with  multi-talented John McCutcheon, whose newest picture book Flowers for Sarajevo tells the uplifting story of the power of beauty in the face of violence and suffering.

MQ: John, in the story, inspired by Vedran Smailovic vigils in 1992, you chose to focus not on Smailovic, but on a small boy who sold flowers with his father. Tell us more about this unique perspective you have taken.

JM: Well, I chose this perspective for two reasons. One, because this is a book aimed at young readers, at children and their families, and I wanted to give them an opportunity to invest in the story, to imagine that they’re there. But more importantly, children today grow up learning about the heroes of our cultures. They hear about Jackie Robinson, and they hear about Nelson Mandela, and they hear about Rosa Parks and Gandhi and Martin Luther King, and these people become so iconic that they almost immobilize us. We can’t imagine being that person, having that kind of courage to stand up and act when it seems no one else might. But each of us have an opportunity to respond to that kind of action, and that’s really the perspective I wanted to take with this book.

MQ: This event happened 25 years ago halfway around the world. How do you feel it is relevant today? Why is it important for families, parents, and children to learn about this particular episode in history?

JM: Well, this is not the lone incident in which someone did something extraordinary that we all have an opportunity to respond to. Today, as we speak, in this period in time, we have a civil war going on in Syria. We have things that require our response as citizens of a global community, whether it be technology, free trade, whatever, we are connected in ways that we’ve never been connected before, and we find ourselves moved by these things. We have lots to learn, and this story is one of the ways in which we learn how to respond in a world in which we read about terror every day, and the goal of terror is to terrorize, we can choose to reward acts of terror with our fear. Or, we can learn from the example of Vedran Smailovic, who braved snipers and bombings in a war-torn street to overcome that fear and respond with an act of beauty and solidarity. 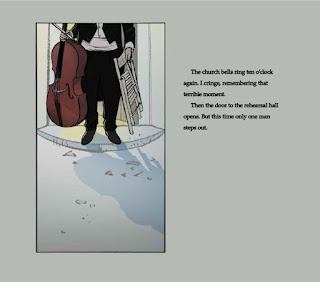 MQ: You met with Vedran Smailovic in Ireland to record your joint musical effort. You are both accomplished artists. What was it like to meet Vedran? Was it easy to fall into a friendship and musical collaboration with him?

JM: We met at a hotel, in the pub there, and he roared up in his great motorcycle. He’s a great rider, all hair and mustache and leather, and came in, and it was as though we had known one another forever. We have had and have a lot of common ground, both as musicians and composers, but also as people who think that music is more than cotton candy for the ears, that it is something that, in our own lives, has moved us and changed us and directed us.

MQ: You’ve written and published hundreds of songs, and you’ve also published poetry. The text of songs and picture books is not unlike poetry, in that it relies on an economy of words, a rhythmic intensity of language. Your three picture books have all derived from original songs. How does your approach to writing songs differ from your poetry or you picture book texts?

JM: Well the obvious difference is that there are more moving parts in a song than there are in a piece of poetry or in the text for a picture book. There’s the music, there’s the instrumental accompaniment, there’s how you use your voice, but they all rely on the distillation of language, of saying a lot with a little.

MQ: What is it about music, John that makes it a language that we all understand?

JM: Well in this case, of course, it was instrumental. It was not confined by any language or dialect or obvious tradition. The piece he played, Albinoni’s Adagio in G Minor, is a very interesting piece of music. It had survived the fire-bombing of Dresden in the Saxon State Library after World War II, and what we know today, if you went and heard a concert of Albinoni’s Adagio in G Minor it would not actually be what Vedran played, because it was an incomplete piece of music. But Vedran just—wisely, brilliantly—chose to play this unfinished version of it. And, I think the fact that it had the invitation for people to imprint on it their own meaning, and it’s a heartbreaking piece of music, but I think the unfinished quality of it, the question it asked by the fact that it just stops at one point, it is important because it does ask that question. It doesn’t tie everything up in a nice neat bow, and that was what I thought was part of the brilliance of choosing this particular piece in this version.

**edited for length. Full interview is available on the audio CD accompanying the hardcover book.

Flowers for Sarajevo will be at your local library, indie bookstore, or Barnes & Noble on April 1st!