Each new season brings to life new books with fresh characters and exciting adventures. We love celebrating the arrival of those stories by getting together with some of our favorite Georgia-based children’s literature advocates at our seasonal Preview Party! This weekend, we gathered on a rainy Sunday afternoon for some wine, cheese, cookies, and–of course–books. 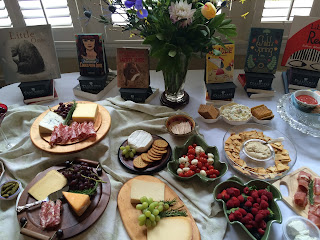 As librarians, booksellers, educators, and journalists arrived, we chatted over a delightful spread of goodies. Introductions were made, acquaintances renewed, and friendships caught up.

Our host, President and Publisher Margaret Quinlin, welcomed the crowd to her home and kicked off the program. Everyone settled in to hear about some of our most vibrant titles from the Spring 2016 list. 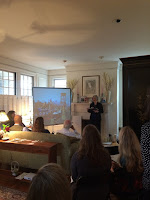 Vicky, our Senior Editor, began with The Sound of All Things by Myron Uhlberg, illustrated by Ted Papoulas. She said afterward that The Sound of All Things is such a dynamic book that she could have taken the whole evening to delve into each of the aspects she highlighted to our listeners. The beautiful artwork and touching story held everyone in close attention, and there were many excited murmurs when Vicky revealed that the illustrator had hidden his daughter’s name, Sally, in each spread. We know what everyone will be doing when they get their own copy! 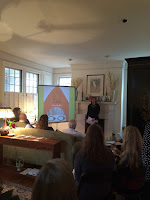 Next up, our Associate Publicist, Niki spoke about the bright and mischievous Little Red by Bethan Woollvin. We got a brief history lesson on the origins and evolution of the Little Red Riding Hood story. Between grimaces and giggles at some of the older versions of the classic tale, everyone eagerly awaited to see what Little Red would be. Niki emphasized that, although the children’s tale has been historically used as a warning for children, Little Red repurposes the premise to teach children about facing their fears boldly.

Finally, Kathy, our Vice President and Associate Publisher, presented Child of Spring by Farhana Zia. Kathy spent some time talking about the beginning of her relationship with Farhana’s writing through her first book The Garden of my Imaan. She explained that what struck her about Farhana’s first book was the way that it dealt with religion, not as a problem, but simply as another part of the life and identity of the young Muslim protagonist. Kathy also revealed that Child of Spring, which explores social class through the experience of a working child, expanded her understanding of diversity in literature, which piqued everyone’s interest in experiencing a similar revelation.

Our headliner, and the absolute highlight of the evening, was author-illustrator Henry Cole, who spoke about his personal story and some of what went into his latest book, The Somewhat True Adventures of Sammy Shine. Given the setting, it would have been easy for Henry to simply talk about his book as something he wished to promote and sell, so his presentation was both refreshing and entertaining.

Henry spent the majority of his presentation talking about relationships. His mother, his siblings, his teachers—all people who had helped shape him into the author and illustrator he is today. He had the room in stitches with his childhood stories of growing up on a dairy farm in Virginia. A moment later we were welling up as he gave tribute to so many of his teachers who truly understood and knew him. Speaking in particular about his 8th grade teacher, he said, “She changed me because she knew me.” Each relationship encouraged him in his drawing, in his creative sensibility, and in his character. 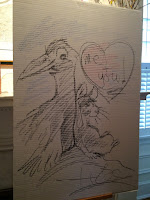 Ever the entertainer, Henry ended with a live illustration. A blank, white pad was set up on an easel beside him, he switched on “I Love Being Here With You” by Peggy Lee, and he drew. For two minutes and forty-five seconds, the music swelled in the room, and we all held our breath and watched. As the song ended and Henry signed his name with a flourish at the bottom of the sweet and simple sketch, the crowd couldn’t help but burst into applause.

With his formal presentation finished, Henry spent the rest of the evening talking to our guests, signing the archival prints of his work that were won in the raffle, and personalizing copies of The Somewhat True Adventures of Sammy Shine.

Of course, after Henry’s inspiring talk and hearing about all of the new titles, everyone had more to say and questions to ask, so we stuck around eating and talking, as ever, about books. As the evening came to a close, we sent everyone home with copies of our spring frontlist and promises of another party in the fall.

A huge thank-you to everyone who came! We hope you enjoyed yourselves as much as we did! 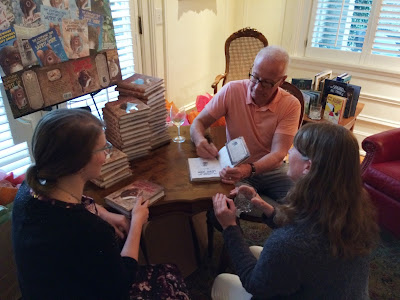