//The code must be inserted ahead of the call to the content Dads & Dinos: Guest Post by Julie Middleton – Peachtree Publishing Company Inc.

Greetings, readers! Today we have a Father’s Day guest post from the fantastic Julie Middleton, author of Are the Dinosaurs Dead, Dad? She’s here to talk about the real father/son outing that inspired her Irma Black Honor-winning picture book. Enjoy! 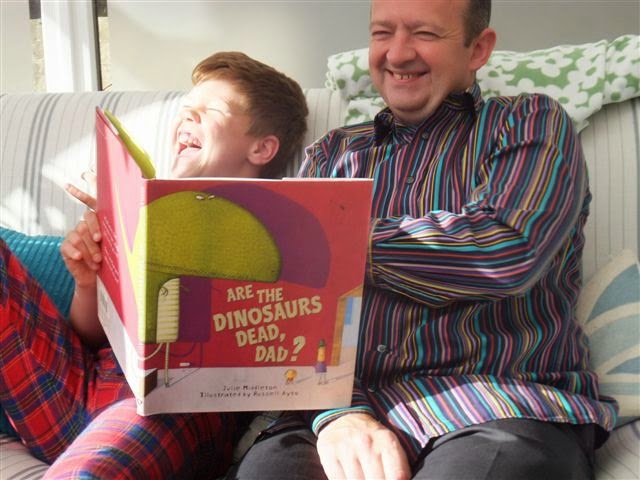 Are the Dinosaurs Dead, Dad? is the story of a dad and his son on a day out together that takes some surprising twists and turns. The inspiration for the book came from my son Harley, who was  then five years old. I was taking him and his dad, Sam, to the train station. They were going up to London for Harley’s first trip to the Natural History Museum.
There was a lot of excited chatter about the  dinosaurs they might see, and then silence.  A look of panic crossed Harley’s face. “The dinosaurs are dead, aren’t they, Daddy?”
Sam smiled. “Of course they are.”
Harley looked as if he didn’t really believe it!
After waving goodbye, I started to play around with the words in Harley’s question, enjoying the potential for alliteration. At the end of my ten-minute drive home I had Are the Dinosaurs Dead, Dad? —the title of a book I had no idea I was going to write!
I liked that Sam was so certain in his reply and that Harley still had a notion that something unexpected could happen. That was the seed of the idea I wanted to play with.
I knew that I needed different dinosaurs with different characteristics to make the story work, so I began researching dinosaur facts. I wanted to include some dinosaurs that weren’t as well-known as others, and I wanted to make sure that each dinosaur did something with Dave (my main character) that was possible for that dinosaur. The Ankylosaurus had bony eyelids, so that made him perfect to wink at Dave. The Deinocheirus, with the longest arms, was perfect for tickling.

Once I knew which dinosaurs I wanted to include and the actions that Dave would see—winking, tickling, grinning, roaring—I then had to think of a way of making these facts and actions into a story. I liked the idea of Dad not believing what was actually happening, and I chose to find a rhythm for his responses, “It’s just your imagination….”
And with Russell’s wonderful illustrations the book came to life. When an advanced copy popped through the post, seeing Are the Dinosaurs Dead, Dad?completed was so special. 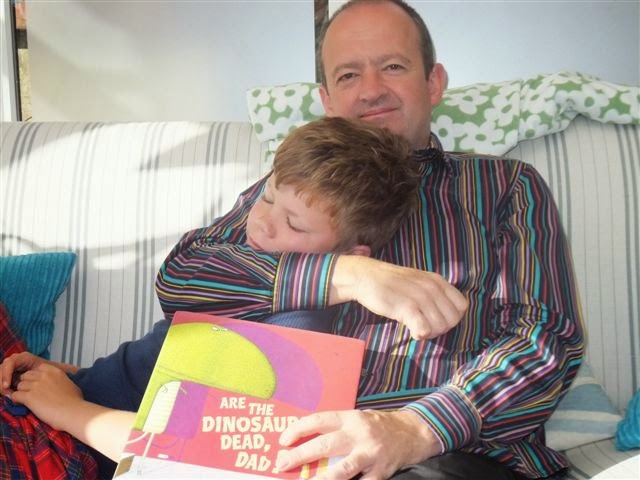 Harley, however, looked at the book somewhat nonchalantly.  “It’s good, Mum,” he said, “but you wouldn’t have that book if it wasn’t for me and Dad!”

Julie Middleton was born in Manchester and now lives by the sea in Brighton with her husband Sam, children Frankie and Harley, and a saggy ginger tomcat, Joe Noodle. For the last 15 years Julie has been writing scripts and stories for children’s television. Are the Dinosaurs Dead, Dad? is her first picture book.