It’s Valentines Day, and call me sentimental, but it’s one of my favorite holidays.
There are the obvious reasons: it’s an excuse to wear red and pink together, eat chocolate for breakfast, and maybe receive your favorite flowers.  But also, it’s my time to indulge in some embarrassingly romance novels.
If you think about it, my love for romance novels probably just stems from my unnatural obsession with fairy tales as a little girl.  I know many a woman who secretly harbors a desire for Prince Charming to show up on his white steed and rescue her (probably from a stack of paperwork and the incessant ringing phone–if she’s anything like myself). 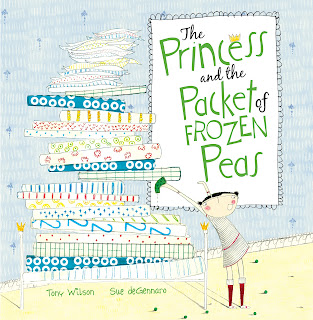 In the Princess and the Packet of Frozen Peas, Prince Charming comes in the form of Prince Henrik, a sporty, outdoorsy kind of guy.  And like most of us, he just wants to find someone that loves him for him, not for his fancy title and crown.
His brother advises him on how to pick a real princess: make a stack of twenty mattresses and twenty eiderdown quilts, and then place a single pea under them all.  A real princess will complain that the pea kept her awake all night.  That’s how he found his princess, Princess Eva.  And she’s been complaining about everything ever since.
Wisely, Henrik decides that the kind of girl he wants, one that likes “hockey and camping and has a nice smile,” would be the opposite of Princess Eva.  And in order to find her, he uses a more extreme pea algorithm.
“Instead of twenty mattresses, Henrik found one thin camping mattress. Instead of twenty eiderdown quilts, Henrik found one old sleeping back.  And instead of a single pea, the prince decided to use a whole packet of FROZEN PEAS.”
Unsurprisingly, all the princesses that visit Henrik have a lot to say about their shoddy accommodations, and the strange bag of vegetables they find in their bed.  He’s almost given up hope when his old pal Pippa shows up.  Pippa loves horseback riding and hockey, and when she thinks the bag of frozen peas makes a great ice pack Henrik realizes she’s the girl for him.

If you’d like to check out some other books to share with your special someone: check out these titles.