Thanksgiving! And What You Thought You Knew About Jingle Bells – Peachtree Publishing Company Inc.

Thanksgiving! And What You Thought You Knew About Jingle Bells

I’ll admit Thanksgiving wasn’t my favorite childhood holiday.  For starters, there aren’t any presents.  OK, stop judging me!  Be honest, and you’ll have to agree that presents are pretty much the barometer for holiday excellence when you’re a kid.

It didn’t help that I don’t like any of the food Thanksgiving is famous for.   No, really.  Not the cranberry sauce or the stuffing or the gravy or the dressing (which actually might be the same as stuffing, I’m not certain), or sweet potato casserole, or green bean casserole, or pumpkin pie.  I don’t even like turkey.  Most childhood Thanksgivings had me sitting at the kids’ table, eating a slice of dry turkey slathered in ketchup with a side of cocktail olives.

Thanksgiving too often gets skipped over nowadays, with Christmas decorations going up at Macy’s in October and Christmas music on the soft rock station in early November.  But don’t think that I’m skipping out on Thanksgiving just because this book’s title is Jingle Bells—what you might not know is that the song ‘Jingle Bells’ was actually written for the Thanksgiving holiday! 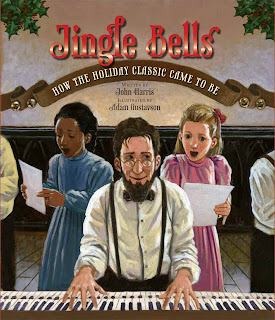 Here are some other fun facts about the song:
-‘Jingle Bells’ was the first song sung in space.  That’s right, on December 16, 1956 the crew of Gemini 6 reported the sighting of “an object, looks like a satellite going from north to south, probably in polar orbit… I see a command module and eight smaller modules in front. The pilot of the command module is wearing a red suit….” before bursting into a rendition of the familiar tune.
-Both Medford, Massachusetts and Savannah, Georgia claim to be the location where James Lord Pierpont composed the song.  We, of course, know it had to be written in good ol’ Georgia.
-The tune of ‘Jingle Bells’ has also been used in German and French songs that celebrate the winter months, even though their lyrics have nothing in common with our holiday classic.
-‘Jingle Bells’ was written in 1857 and originally titled ‘One Horse Open Sleigh.’
-We can thank Carl Weismann of Denmark for the timeless ‘dogs barking Jingle Bells’ phenomenon.  Weismann was a bird song enthusiast, who was annoyed by his recordings being marred by barking pests.  He decided to edit out the barks, and then linked the tape together, adjusting the speeds to manipulate the sound.  This was a pretty complex task in the 1950s, and is considered one of the ground-breaking steps toward music manipulation (I’m not going to say Weismann is to blame for Auto-tune, but I wonder where Rebecca Black would be without him?)

-The horse mentioned in the song is not named ‘Bob’ or ‘Bobtail,’ but instead that refers to the practice of ‘bobbing’ or ‘docking’ a horse’s tail, cutting it very short to keep it from becoming tangled in the harness.

Have a fun and safe Thanksgiving holiday with the ones you love!