//The code must be inserted ahead of the call to the content Sunday Brunch with Alison Hart – Peachtree Publishing Company Inc.

For Sunday brunch today we are chatting author Alison Hart about the research behind and perspectives in the latest installment in her Dog Chronicles series Leo, Dog of the Sea. 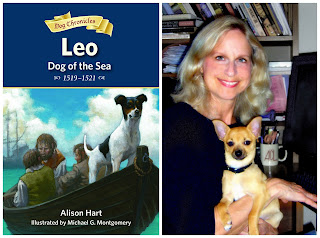 Q: The Dog Chronicles series portrays history through the unique perspective of dogs. What inspired this approach?

A: When I first thought about a ‘dogs in history’ type series, I began reading everything I could about how dogs and humans have worked together throughout time. I felt showing history through the perspectives of dogs was a great way to dive into gritty historical moments—such as a horrific WWI battle and a mine fire—and make them interesting for kids.

Dogs have been used in so many ways in history that I wanted to show a variety in the series. Darling, Mercy Dog of WWI, the first book, is about the different jobs dogs were used for during wartime and trench warfare. The second book, Murphy, Gold Rush Dog, is set in Alaska during the 1900 gold rush; dogs were necessary as pack animals, sled dogs, guards, and companions. Finder, Coal Mine Dog, the third in the series, is about dogs that worked with coal miners in the early 1900s.


Q: What sort of research goes into telling a story through a dog’s-eye view?

A: Historical fiction requires incredible amounts of research whether the hero is a dog or a human. To write historical fiction, I have to know enough to “sort of” be an expert. Then I look for exciting moments in time and then add in great characters and rich sensory details. If the facts don’t enhance and move the story, they are left out.

Q: The Dog Chronicles often deals with serious, even brutal, situations that occurred in history. How do you decide to approach these events when writing for children?

A: I try to be very sensory in my writing, so sometimes there are graphic details about explosions or deaths. But since my heroes are usually dogs or children, I tell the story through their eyes, so it adds an immediacy and innocence.

Q: In Leo, Dog of the Sea, Leo is a dog who chases and catches rats on the ship. What kind of dog is Leo and how did you come up with his character?

A: Since early times, the Spanish had “ratters,” a small dog that kept the vermin at bay in inns and homes. There is no mention of a rat dog on any of Magellan’s ships, but history does mention plenty of rats. And since this is fiction, I simply decided that Magellan needed a ratter!

Q: A lot of the characters in Leo are real historical figures. How did you go about characterizing these people from hundreds of years ago?

A: Luckily, fiction is on my side. There are many books about Magellan, and Pigafetta’s journal gave some insights into the captain general as well as the journalist himself. Some of the dialogue came from historical quotes, but mostly I gleaned information about the officers and crew from research and then turned them into “real” people. There was a page who made the entire journey around the world, but Marco the character is fictional.

Q: What do you hope children will take away from reading this book?

A: I hope young readers become hooked on history when it is told as a story and not a list of facts. Each time I research an event, I am fascinated by the inventiveness, perseverance, and strength of humans—and dogs!

Leo, Dog of the Sea will be at your local library, indie bookstore, or Barnes & Noble on April 1st!