Read-A-Thon: A Mouse, A Cat and Charles Dickens Walk Into a Pub – Peachtree Publishing Company Inc.

Read-A-Thon: A Mouse, A Cat and Charles Dickens Walk Into a Pub

Let the Read-A-Thon begin… on my time. I didn’t actually get up at 8 a.m., mostly because I strongly believe that no one should ever be awake that early on a Saturday. I’m up now though, which should count for something. 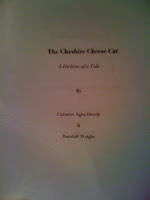 I’m starting out today’s Read-A-Thon with a manuscript we’ve acquired at Peachtree Publishers entitled The Cheshire Cheese Cat: A Dickens of a Tale. It’s a middle reader novel co-written by Carmen Agra Deedy and Randall Wright. 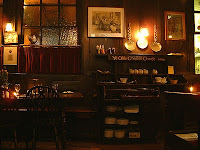 The idea for this story came in 2002, when Deedy was in London and happened upon the Ye Olde Cheshire Cheese Pub on Fleet Street. Little did she know that she was not only entering one of the oldest pubs in London, but one famous for being frequented by Charles Dickens himself. The publican was kind enough to let her explore the old place, and hanging on the wall she found an illustration of a clowder of cats with tonsures sitting around a table. Curiouser and curiouser indeed…

10:25 a.m. 32 pages and a mini nap later. Reading a manuscript in the works is always an interesting experience. The copy I have is annotated with editorial notes from the authors and editor, so I get to see where the story is going, as well as get a better understanding of the editorial process. As our story unfolds, we are introduced to a cat named Skilley who carries a shameful secret… a love of cheese, a mouse named Pip who appears to be hiding something, Pinch, who seems to be quite the villain, and Dickens himself, who writes at the pub and can’t quite get the first line of his new book right. But who is this Melville they keep mentioning?

11:25 a.m. 60 pages in and now a seemingly haunted pub. However, I doubt there is an actual ghost. I’m guessing it’s this Melville I keep hearing about. While there are talking cats and mice, the story is not fantasy. It is believable and realistic. What I am most appreciating is the distinction of characters. Even the secondary characters like the cook, Croomes, have distinct voices, accents, personalities, etc. They speak like they would for their station in that place and time. Another interesting thing to note is the language of the text. There are words like “rake,” “mercurial,” and “blunderbuss.” Any of the vocabulary like this is easily defined at the bottom of the page for young readers, often in humorous ways. I am appreciating that the authors have enough faith in their readers to include interesting words, as well as references to Dickens, and the history of England.

“I am of the House of Battenberg: a Raven of the Tower of London, property of Queen Victoria of England. As I stand or fall, so does the Empire.”

What an interesting turn of events… For those of you that don’t know, since the reign of Charles II there have been ravens at the Tower of London. The legend says that should the ravens ever leave, the monarchy will fall. You can read more about the tower ravens here. No more spoilers though! I don’t want to give away the whole story now!

3:54 p.m. Pip, Skilley and Melville seem to have quite the plan up their theoretical sleeves… I’m on page 127.

6:28 p.m. I fell asleep… but I woke up and have almost finished the book. Since the author seems to have given it away already in the comments, I don’t feel bad about admitting that Queen Victoria herself has found her way into this story and is quite the amusing woman… but can she help Melville?

6:54 p.m. I have finished! There were some twists and turns, a battle of mice, and some deaths I mourn… I don’t want to give too much away, so on to the next book!